Cyclopes (pronounced sigh-CLOH-peez, singular cyclops) are giants with enormous mouths and a single eye in the middle of their foreheads. They average about nine feet in height, weigh around 600 pounds, and were among the earliest of the civilizations to grace the surface of Golarion.[1]

Cyclopes can live for up to 500 years. However, most either starve to death or are killed before dying of old age, except for the prophets that are protected and nurtured by their followers.[2]

Cyclopes are voracious eaters capable of consuming more than a hundred pounds of food per day. Because of this, they usually live alone, as multiple cyclopes in the same area can quickly deprive themselves of food. They can eat almost everything, with a preference toward meat. Starving cyclops quickly become single-minded and bestial in their pursuit of food, while well-fed ones are surprisingly erudite, so most maintain a stable larder.[2]

A cyclops' eye consumes nearly as much energy as its brain does. A jutting brow protects the arteries that feed it. Although cyclopes lack depth perception, the eye allows them to see from much farther and in darker conditions than humans can. The eye is also their source of their precognition. The greatest cyclopes can see someone or something else's entire fate with but a glance, but today most can only see a few seconds into the future with great difficulty.[2] 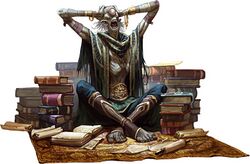 The cyclopes once ruled nations in northern Casmaron, Avistan, and Garund in the Age of Legend before the rise of Azlant.[3] Their seat of power was the empire of Ghol-Gan, which stretched over the territories now known as the Shackles, the southern Sodden Lands, as well as Mediogalti Island.[4][2] Exiles from Ghol-Gan later founded Koloran on Casmaron, and another group established a prominent cyclops society on Iblydos. An alternative theory posits that all of these cyclops civilisations arose independently at the same time.[5][2] The ancient cairn of Hask-Ultharan in Iobaria is marked in their script.[6]

The people of Iblydos owe their existence to the cyclopes that emigrated from Ghol-Gan during that doomed empire's decline, and though the giants have dwindled in number since, cyclopes and humans continue to co-exist on the archipelago. The greatest mortals earn the rite of myth-speaking, in which the cyclopes foresee how that hero might attain mythic power through great deeds. Many of these so-called hero-gods have since ruled one of Iblydos's city-states, granting spells to followers and heralding in a new age of prosperity or tyranny. Since the deaths of Aroden and prophecy itself, the tradition has failed with troubling frequency. Now the last hero-gods age and dwindle, and a new generation of heroes must arise to combat the greatest threat to the islands: the thalassic behemoth Ousmariku.[7] 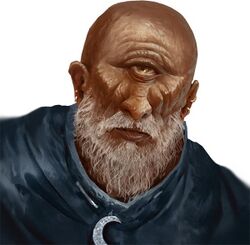 Most cyclopes, though still intelligent, are usually too preoccupied with the pursuit of food to concern themselves with ambitions in the absence of a leader to guide them. They rarely plan, relying on their foresight instead. Today, mated pairs of cyclopes are rare; most mate infrequently, and cyclops children are raised by the parent of the same sex. Many cyclops boys are eaten by their fathers before maturing.[2]

Some cyclopes have abandoned reason entirely, becoming truly savage, bloodthirsty beings, indulging their basest impulses. They can be distinguished from the normal thuggish (but still sapient) cyclopes by their dull, blood-red eyes. Their numbers are constantly on the rise.[2]

Many cyclopes practice ritual cannibalism, which they adopted near the end of their civilisation. They never eat the eye, which is buried or preserved. Injuries to the eye are taboo, being blinded is a fate worse than death, and poking the eye is seen as the greatest insult.[2]

Except in a blood rage, cyclopes are often stoic and fatalistic, as they know that they cannot change what they see with their precognition. Obesity is viewed as a desirable trait, and ancient cyclops art often depicted rotund deities and heroes.[2]

Some visionary cyclopes, known as high cyclopes, are driven by something higher than immediate needs and can command others to conquer territories or make great advances in a field of study. The rare few cyclopes that practise magic often find themselves with a natural aptitude, due to their precognition. A charismatic high cyclops warlord could incite a resurgence of cyclops civilisation.[2]

Most ancient cyclopes worshipped their ancestors, the sun, and the moon, or the concepts of fate and foresight. As their empires declined, cyclopes adopted dark gods from the natives of the Darklands and even more eldritch forces from the Dark Tapestry. Modern cyclopes worship a variety of different gods.[2]

Cyclopes from different parts of Golarion biologically vary very little from each other, with the exception of skin colour. The main split within modern cyclopes is between the savage and the civil ones, which originally sprang from the segregation of ancient cyclopes into the seer caste and the soldier caste.[2]

During the decline of Ghol-Gan, their otherworldly patrons guided the magical and experimentation of cyclopes, which produced a few offshoots: the hulking, savage great cyclops; bestial ngogas; undead gholdakos; and sickly but prophetic oracular cyclops.[2]