A dog, sometimes known as a hound or mastiff, and by many differently named breeds, is a four-legged animal. Most dog breeds have long been domesticated by humans, which has led to many specialized types of dogs, from small ratters to strong fighters large enough for halflings and gnomes to ride as mounts. Wild dogs are more similar to coyotes, jackals, hyenas, wolves, and other pack animals.[1]

Dogs come in nearly any combination of shapes, colors, characteristics, and sizes, ranging from tiny creatures who can fit in the palm of a hand to mastiffs and wolfhounds several feet in height.[1] All have padded feet and claws, and most have fur and tails.

Many dogs have powerful jaws, keen senses of smell and hearing, and a strong predatory instinct. While most are not intelligent enough to be sentient, many can learn words and commands and can be sensitive to social cues and body language. Most are fast runners with considerable endurance, though some dogs bred more for cosmetic traits than work have stricter limitations or health issues.[1]

Dogs can thrive in nearly any environment, and breed easily and frequently with litters of several pups.

As with many small or wild mammals, dogs are prone to contracting rabies, a contagious disease that drives them into an angry frothing rage. A rabid dog's bite often spreads the disease.[1]

Riding dogs are large dogs that can be fitted with a small saddle and ridden by halflings and gnomes.[2]

Dogs have been associated with humanity for almost as far as records and stories exist.[3] Humans put dogs to many types of work, including cart hauling,[4] sledding,[5][6] guarding, herding,[7] companionship, combat, and as mounts.[1][6][8] Dogs also serve as entertainment, whether in vicious bloodsport or as racing dogs.[6][9]

Ornate and rare dogs sometimes serve as lap dogs in noble courts, including in Cheliax and Taldor,[10] as well as by more aspirational nobles in far-flung backwaters.[11] On the other end of the spectrum, thick-bodied, powerful combat-trained dogs are bred in Molthune for infantry and in Cheliax for dogfights. Riding dog breeders are common in Absalom, Almas, and Katapesh.[6] 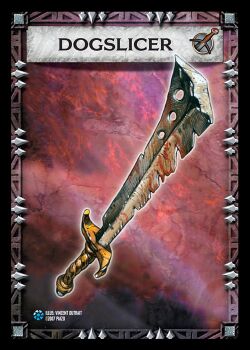 Goblins are famously hateful of dogs—among their most iconic weapons is the dogslicer, a crude sword designed to scare off or cut down attacking dogs.[12] (While goblins domesticate creatures known as goblin dogs, those creatures are more akin to rodents than canines.)[3] The goblin hero-god Zarongel is a god of dog killing, favors the dogslicer, and uses a severed dog's paw as his unholy symbol;[13] legends about Zarongel claim that dogs hunted his favored goblins when he was still a barghest, which inspired him to teach goblins how to ride.[14] Goblins also believe their souls are absorbed by the teeth of dogs that kill them.[15] Goblin chieftains often taken on dog-referencing names, such as "Dogchewer", that likely intimidate other goblins,[13] while dog-themed tribes such as the Houndgutters wear dog hides as armor.[16]

Infernal dogs, such as the hell hound, three-headed cerberi, and Nessian warhound, are especially feared by enemies of Asmodeus and Cheliax.[17]

Celestial dogs, such as the red mastiff-like Caydenite offspring like caypups and cayhounds, often join adventurers and loyally protect humans much like their mortal counterparts.[18] Hound archons are good-serving, humanoid-like archons with canine heads and features.[19] Blink dogs, which roam Katapesh, resemble dogs in many ways but possess magical dimensional teleportation abilities.[20]

The Embeth Travelers ranger band that guards Uringen from the fey of the Embeth Forest have a breed of hunting dog, called the Embeth Hound. These dogs weigh around 100 pounds, are short-haired with patches of blacks, whites, and grays, and have differently colored eyes. The dogs are said to enjoy water, be loyal, and are exceptionally skilled at tracking.[25]

Erutaki huskies are riding dogs used by their namesake people as sled dogs across the Crown of the World.[26]

A little-known pharaoh of ancient Osirion is known only as the Dog Pharaoh, with a tomb rumored to be located in the Sahure Waste. The name is thought to be the result of the pharaoh losing to a rival, who then replaced all mentions of the loser in history with the slanderous epithet "Dog Pharaoh".[27]

One of the astrological constellations over Golarion is The Pack, which is interpreted as either loyal hounds or ravaging wolves.[28]

A type of spiked gauntlet is sometimes known as a dog's claw.[29]

Barbarians who fight alongside particularly vicious dogs are known as "mad dogs".[8]

Gnolls are dog-like humanoids, and the part of Katapesh most associated with them is known as Dog Town. It includes dog-themed establishments, such as the Rabid Dog tavern.[31]

The Dog's Teeth district of Cassomir is a rough-hewn sector of the city off the coast of Grayguard Castle.[32]

Dogs hold significant symbolic power in Irrisen, and as such are often kept as pets and feature in motifs.[33]

Cayden Cailean also has a pet mastiff named Thunder, who also has a celestial cayhound son named Little Thunder.[36] Caydenites also value red hound rings, magical rings that can summon a red mastiff and transform its wearer into one.[37][38]

Exalted followers of Erastil can summon hound archons to their service.[39]

Sarenrae is served by a hound archon named Charlabu who takes the form of a mortal dog when aiding those in need.[40]

The elven hunting deity Ketephys is often depicted with a dog named Meycho.[41]

Yeth hounds are dog-like beasts who represent the Abyss, particularly Lamashtu, whose realm includes a pack of them led by Bloodmaw, and a pack known as the Black Hunt that accompany her herald Yethazmari and which might be descended from him.[42]

Dogs can serve as familiars to spellcasters, and often find favor among those who value loyalty, such as Hellknight signifers. Some Riftwardens also choose dogs as familiars simply for their commonality.[43]