The city of Usaro (population 8,790)[1] is the former domain of the Gorilla King. The king and his followers were intelligent, bloodthirsty apes who served Angazhan, demon lord of beasts.[2]

Usaro is a monolithic city on the southern edge of Lake Ocota, where the little known Blood River flows into the lake.[3] Its inhabitants are feared throughout the Mwangi Expanse. The former king's treasure vaults are reputed to contain priceless riches, including the mighty bombard Worldbreaker, but the ominous sound of human-skin drums carrying across the lake deters all but the bravest or most foolhardy of treasure hunters.[4]

The Gorilla King's forces were opposed by the elven Kallijae tribes.[5] 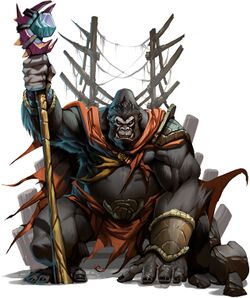 The local Zenj tribes have always kept away from the city, but their warnings about ferocious, intelligent apes were initially dismissed as primitive superstitions by foreigners. Taldor's Sixth Army of Exploration found to their cost that the stories were all too true. The Gorilla King's forces massacred them at the battle of Nagisa; the few who survived ensured that the warnings would be heeded in the future.[3]

In 4710 AR, the Gorilla King's death caused Usaro to fall into chaos as his minions turned against each other to fill the power vacuum. Several months after, Kallijae elves took advantage of the disorder to invade Usaro and free many of the captives. The populace was further splintered when orcs raided the city and seized its totem of Angazhan, and many survivors claimed that Usaro had thus lost Angazhan's blessing.[8]

The Gorilla King was the absolute ruler of the city. Below him, status was awarded to those strong enough or cunning enough to seize it. Competition was encouraged, as it removed the weaker members from society. Those individuals with the highest status were sometimes called the Court of Hateful Smiles.[3]

In the chaos following the Gorilla King's death, the Mwangi warrior and Angazhan worshipper Shosenbe has promised to exact revenge on the elves and orcs. His faction, called the Chosen, has deflected further raids and seeks to unite Usaro against its enemies. However, Shosenbe is tight-lipped about his motives and allegiances, and it is suspected that he does not actually worship Angazhan and is only following his own ends.[2]

The city consists of ancient ziggurats, made of white stone. It melds into the jungle; only the tallest buildings appear over the forest canopy.[3]

The High Throne of the Gorilla King is on the top of an ancient temple crowned with a massive granite sculpture of an ape's head. There are also circles of ape head totems throughout the city, which are used for bloodthirsty rituals.[3]

The domed Angazhan's Oracle is beside the river. Here, prisoners are prepared for sacrifice and Angazhani oracles attempt to predict the future. Captives are kept in the nearby Bridge of Cages, dangling across the river. Sometimes, the cages are lowered slowly into the river. The water is infested with piranhas, and the oracles believe the screams of the prisoners can help them in their prophesying.[3]

Beneath the temple is a seemingly bottomless pit, known as the Chasm of Screams, which houses a deadly mist known as the Tik Taan. Some feel that the Tik Taan may be the reason the city was originally abandoned.[3]

Ancient pillars stand along the river. City guards often scale them and use them as vantage points.[3]

There are a pair of small islands at the point where the Blood River flows into Lake Ocota, known as the Mouth of Usaro. The city's fleet of dugout canoes and kayaks are moored here when not in use.[3]

The inhabitants of Usaro raise baboons as hunting animals, and these are kept in pens across the city.[3] The charau-ka living in the city are the most organized of their race.[9]