The Elemental Plane of Water, the Boundless Sea, is part of the Inner Sphere and composed almost entirely of fresh and salt water. It surrounds the Plane of Air and is in turn surrounded by the Plane of Earth. Detritus from other planes provides pockets of air and solid material,[1] and it is perhaps the most hospitable of the Elemental Planes for extraplanar travelers.[2] 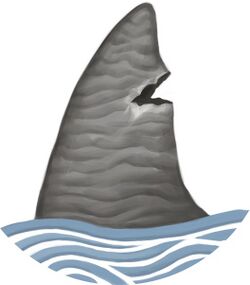 The unholy symbol of Kelizandri.

The ruler of the Elemental Plane of Water is Kelizandri, the Brackish Emperor.[3]

Where the Plane of Water borders the Plane of Air, storms often sink into the waters to form enormous whirlpools and waterspouts. At the border with the Plane of Earth, the water becomes tinged with sediments and thermal vents shoot jets of mineral-rich water and superheated brine into the oceans of the plane.[5]

A number of unusual locations and phenomena exist within the Boundless Sea, such as the Forest of Oils, a vast collection of floating spheres composed of diverse chemical substances; the stars Axtarr, Firros, and Palixna, spheres of flame of unknown origin that hang unquenched in the waters of the plane;[6] the Fulgurate Marble, a moon-sized transparent sphere home to a mysterious civilization; and the Jungle of Worms, a three-dimensional forest of coral and sea anemones.[7]

For obvious reasons, this realm is inhabited almost exclusively by aquatic and other water-breathing creatures. The race of genies known as marids control a vast empire, in nearly-constant warfare with the native sahuagin. In the darker depths, cyclopean kraken and brine drakes make up its less innocuous denizens. Beyond these larger populations, small settlements of water mephits, tritons, merfolk, and a staggering variety of more mundane aquatic life makes its home here.[1]

The empire of the water genies known as the marid once ruled the Plane of Water, but collapsed after the destruction of its capital city, Arzanib, and the death of the last Saline Padishah, Niloufar the Great, 10,000 years ago. The marids have remained divided since, and in the modern day live in disparate nations with only sporadic contact with one another.[8]

The sahuagin of the Plane of Water are actually not natives, having traveled there from Golarion in a massive exodus millennia ago. Upon arrival they made war on the fractured marid civilization, attempting to gain an empire for themselves. Once they achieved their objective, however, they fell into infighting and eventual civil war. Now the sahuagin inhabit the darker reaches of the plane, grouped into small kingdoms controlled by tyrants or mutant warlords who long to re-establish their lost empire.[9] The sahuagin claim to have come to the plane following a prophecy, but scholars theorize their arrival to be due to a kraken scheme or a terrible mistake on the part of the marids.[10]

Despite their intelligence and power, the krakens are not prone to organizing their efforts. This has allowed the brine dragons to expel them from the depths as their own power and holdings grew, forcing the krakens into the lighter waters of the plane. This has forced many krakens to enter in begrudging alliances with other races, often installing themselves as advisors to marid and sahuagin rulers. While the krakens find such alliances demeaning, they hope to forge the disparate genie and sahuagin nations into stable empires once again, specifically ones heavily reliant on kraken support.[11]

The brine dragons rule large stretches of the Plane of Water's darker depths, the extent of each realm and the size and power of its dragon ruler increasing as one descends. While solitary and reclusive, the dragons form a collective realm led by interconnected councils, the most senior of which advises the realm's ultimate ruler, the elemental lord Kelizandri. The brine dragons' relationships with other races are often adversarial; the dragons seek to bind all visitors into their realms to their service, and are locked in conflict with the krakens who also inhabit the depths. The constant internal and external conflicts of their realms have driven several brine dragons abandon it to pursue nomadic lives, although these deserters find themselves hunted by Kelizandri's forces.[11]

The Plane of Water is home to numerous species beyond the dominant ones, both native and immigrant. Merfolk are immigrants to the plane, having settled here at an unknown date, and live in carefully hidden settlements throughout its expanse. In the unlit waters close to the Plane of Earth, deep merfolk can be found. Undines, likewise descended from immigrants to the plane, live in communities throughout the Plane of Water. Although they are scattered and often found living among the other races, rumors claim that they are planning to unite to form a major power of their own.[6]

In addition to civilized societies, the Plane of Water is home to marine creatures of immense size. One such creature is the Lion's Mouth, a sapient jellyfish-like creature composed of billions of aware and perceptive organs, which lives within a kelp forest stretching from the Plane of Earth nearly to the Plane of Air, where the jellyfish's bell floats. Lure is an anglerfish thirty-five miles long that feeds by filter-feeding entire towns and pods of whales. A town, the ceratioidi trading port of City-on-Lure, exists on the creature's back. Other beasts of similar size include the Chiming River Dragon and the Void Mosasaur.[6]

Paizo published a chapter about the Plane of Water in Planes of Power.