The chimera is a flying monster that is part goat, part lion and part chromatic dragon.[1] 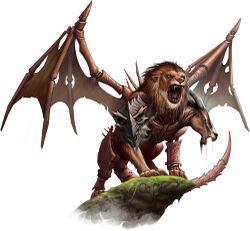 A typical chimera has the body and head of a lion, flanked by two additional heads—one of a goat and the other of a type of chromatic dragon. It is approximately 10 feet long and 5 feet tall at the shoulder, with large wings. A typical specimen weighs 700 pounds. They rarely speak, being barely above animal intelligence, but can do so from all three heads at once.[1]

Chimeras are typically found in temperate hills,[1] but those found in other terrain may have different heads more suited to the environment. For example, a snow leopard or jaguar head instead of a lion's, or a musk ox or bison head instead of a goat's.[2]

Despite their three heads, they have only a single consciousness. All their heads have a common will behind them, and never argue amongst themselves.[3]

Chimeras are the descendants of monsters created by Lamashtu. These monsters, the male orthruses and the female legendary chimeras, still remain in remote parts of Golarion but are much rarer than chimeras.[4]

Their strange combination of heads was the result of Lamashtu's desire to create a carnivore that could also survive on grass and thorn bushes when prey was scarce.

The offspring of these two creatures sometimes resembled chimeras, but more often were single-headed "abominations". The legendary chimeras responded by eating their mates and their children. In order to stop chimeras from dying out, Lamashtu modified them so they could breed amongst themselves.[4]

Chimeras prefer to inhabit badlands marked with canyons, natural arches and scrubland, which provide them with many ideal ambush locations. They avoid high mountains, as they are not strong fliers, and thick forests where their movement is hindered by heavy vegetation.[5]

Chimeras are found alone, in pairs or in larger groups that superficially resemble prides of lions. These prides are led by a dominant female, and the other members are usually all males.†

Originally they were hermaphrodites, with both partners becoming pregnant after a successful mating. However, they have now split into two sexes. The pack leader takes on the female role and all the others take on the male role. A male who becomes pack leader changes sex to become female; a pack leader who is disposed (and survives the experience) changes sex to male. They can live up to two hundred years, but few of them survive for so long.

Chimeras are usually lazy, preferring to intimidate other creatures into becoming their slaves rather than working for themselves. They also make poor servants, as they are treacherous by nature and prone to acts of mindless destruction unless closely controlled.[3]

Some chimeras are out of the ordinary.

A chimera fights using the abilities of all of its component creatures. The lion head bites, and the lion-like fore-paws have powerful claws. The goat head butts. The dragon head bites, and also has a breath weapon appropriate to a chromatic dragon of its colour.[1] The chimeras which make up a pride will not necessarily all have dragon heads of the same colour.[2]

Chimeras are believed to have first come into existence on the isles of Iblydos, off the coast of Casmaron. They have since roamed far and wide, and are most common in Garund, southern Avistan, and southern Casmaron.[2]

A number of ancient Taldan families took the chimera as their heraldic symbol. Their descendants took magically-bound chimeras with them as part of the settlement of Sargava by Cheliax. Some escaped, and their descendants now live in the Bandu Hills and the M'neri Plains and elsewhere, including the Mwangi Expanse. They have taken to gathering lions and dire lions into their prides. Chimeras are nearly extinct in Taldor itself, but some survive in the depths of the Border Wood.[2][6]

Chimeras were welcomed into Osirion as a result of their resemblance to sphinxes, but the locals soon realised their error and have since done their best to eradicate the beasts.[2]