Collectively referred to as the Maelstrom (pronounced MEYL-struhm),[1] vast swathes of uncharted, unclaimed terrain metaphysically border and surround each of the planes on the Outer Sphere. Mysterious and dangerously chaotic lands untouched by the gods, these regions lack the cohesive stability present in all of the other planes; even the brutal depths of the Abyss possess a structure that the Maelstrom does not. Some scholars believe the Maelstrom to be ancient, pre-dating all other places in the multiverse, with the possible exception of the Abyss. Certainly, the proteans are associated with the discovery of the Abyss.[2]

For another meaning of "Borderlands", please see Borderlands (Osogen).

Rather than some ever-changing sea of randomness, when viewed from the edge of another plane the Maelstrom appears much like that of its adjacent neighbor. The Maelstrom spans two regions: the Borderlands, a broken ring around the perimeter of the plane, and the Cerulean Void, an ocean of liquid quintessence that can freeze or evaporate without warning. The differences grow more profound as one travels further from the stabilizing Borderlands to the mutable freedom of perpetual change of the Cerulean Void. The Maelstrom defies the efforts of mapmakers, as its very character shifts and flows like the tide of an unseen ocean, to which the Borderlands are but shores and calm shallows.[3][4][5]

Crystalline forests melt like candle wax into shallow brine seas with jewel-like icebergs, and then sublimate to vast parched deserts, all within the stretch of days. Still, islands of stability do exist within the depths of the Maelstrom. These islands are ruled by petty gods, exiled fiends, and fallen celestials, and even the rare stronghold of a mortal wizard or priest-king can be found holding itself against the metaphysical lapping tide.[3]

The Maelstrom is infused with the quintessence of destroyed outsiders whose energies failed to reach planes of their own alignments, and it grows by eroding and consuming quintessence from planes of the Outer Sphere. Such quintessence returns to its unaligned potentiality via the Antipode, an aeon-guarded hub that redistributes it back to the Positive Energy Plane.[6] 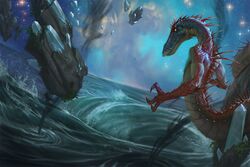 A protean gazes at the Maelstrom.

Souls whose life mirrored the chaotic randomness of the plane undergo perpetual change in the Maelstrom, and chaotic powers may draft them to fight in wars on the ordered city of Axis.[7]

As it touches all other Outer Planes, the Maelstrom's Borderlands are full of wanderers, exiles, and armies from other planes, entities that sometimes possess characteristics and behaviors at odds with their origins. The native inhabitants of the Maelstrom are the chaos beasts, living incarnations of entropy; the valkyries and einherjar, risen soldiers; chaos incarna; and the ancient serpentine proteans. The Maelstrom's petitioners, known as the shapeless, are incorporeal and constantly change their shapes; most of them end up becoming chaos beasts, unless they specifically asked a protean chorus for transformation into one of them, or qualified for the status of valkyrie or einherji.[5] Claiming to be the first children of the Outer Sphere, the keketar, imentesh, and naunet proteans worship the Maelstrom itself and the godlike beings they refer to as the Speakers of the Depths, whom scholars speculate to be something akin to a pair of conjoined gods or a single dualistic entity.[3] Hunduns are uneasily accepted within the Maelstrom, as they embrace its destructive aspects even though they shun its creative ones, and are largely left to their own pursuits by the proteans.[8] Screaming owlbears are also said to inhabit the Maelstrom.[9]

The Maelstrom is home to one of the most diverse collection of divinities in the Outer Planes.[5]