Durvin Gest is perhaps the most famous of all Pathfinders and his exploits feature prominently in several of the earliest volumes of the Pathfinder Chronicles.[2] He is best known for his exploration of Old Azlant, the destruction of the treacherous Lens of Galundari, and his commandeering of The Silken Purse and piloting it around the southern tip of Garund. Even centuries after his final disappearance in 4360 AR, Gest remains one of the most legendary names in Golarion and statues of him grace many of the Pathfinder Society's facilities, including a 20-foot likeness in Absalom's Grand Lodge.

Few Pathfinders have had as marked a presence in the pages of the Pathfinder Chronicles as Durvin Gest, who is fabled to have attained immortality by discovering a fountain of youth. Some theorize that the Decemvirate has used this discovery to extend their own lives, and in doing so, maintained their own control of the organization.[3]

The debut volume of the legendary Pathfinder Chronicles (released in 4317 AR) recounts Gest's famed exploration of the ruins of Lost Azlant far to the west of the Arch of Aroden and played a major role in the Society's growth in its earliest years of existence.[4] Artifacts recovered from this (including a cache of rare ioun stones and mysterious Azlanti technology, still adorn the treasure galleries of Skyreach.[5]

In 4323 AR, Gest explored and catalogued the 31 Siege Castles in the Cairnlands surrounding Absalom, including such legendary sites as the Spire of Nex, El Raja Key, and the Red Redoubt of Karamoss. Wealth attained from the Society's plundering of these ruins helps fund the fledgling organization and the construction of the Grand Lodge.[6] An account of Gest's discoveries can be found in Pathfinder Chronicles volume 2.[5]

Pathfinder Chronicles volume 4 details Durvin Gest's commandeering of The Silken Purse from the pirate queen Mastrien Slash. The Pathfinder piloted the vessel around the horn of Garund, where he encountered a strange matriarchal society with origins dating back thousands of years. Gest abandoned Slash at the continent's southern cliffs in an apparent sacrifice, but she eventually wrested control of the nation, leading a period of military expansion which resulted in her army's transformation into the Field of Maidens by the archmage Geb at the southern borders of his nation in 4329 AR.[5]

Additionally, Gest claimed to have recovered several powerful artifacts from a "Chamber of Heaven" in a temple in lost Ninshabur. Allegedly among these relics are the Scepter of Ages, the Apollyon Ring, and the Lens of Galundari,[7] the latter of which Gest cast into the Nemesis Well near Osibu in the southern Mwangi Expanse in 4332 AR.[6]

Known for disappearing into unexplored lands for years at at time, Durvin Gest vanished for the last time in 4360 AR. While all known copies of volume 5 of the Pathfinder Chronicles were recalled and destroyed by the Decemvirate shortly after its release, modern scholars believe the document to have contained information which shed illumination on the famous Pathfinder's disappearance.[6][5] 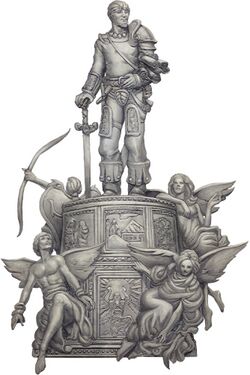 A statue of Durvin Gest.

Even centuries after his mysterious departure from Golarion, Durvin Gest remains one of the most renowned names throughout the Inner Sea region. Prospective adventurers pore over accounts of his exploits and are inspired by his discoveries and exploits, and the Pathfinder Society reveres him more than any other member of the organization.

Many lodges feature statues or memorials to the pioneering explorer, including a massive 20-foot-high likeness in the Grand Lodge of Absalom. Standing atop a pedestal bearing angelic figures and friezes of Gest's long and celebrated career, the statue, which captures the Pathfinder in his later years, still dashing and bearing an assortment of scrolls and adventuring gear, stares intently into the distance. Local folklore holds that anyone following the line of the statue's gaze thousands of miles would eventually reach the site where Gest allegedly discovered the fountain of youth.[4][8]