Grindylows are aquatic creatures resembling a goblin from the waist up and an octopus from the waist down. Despite the resemblance, they are not considered to be humanoids.[1] 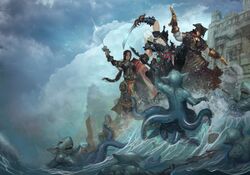 A grindylow attacks a band of adventurers.

Like goblins, a grindylow has a large, grotesque head and many teeth and two arms with fingers. However, its head has a vague shark-like resemblance and gills, and instead of legs it has six tentacles resembling those of an octopus. While most grindylows are about four feet tall, there is no limit to their potential growth, and a few rare grindylows have grown to massive sizes.[1]

Grindylows can eat almost any living creature, and take pleasure in wreaking pain and chaos. They can wield weapons in their hands and entangle foes in their tentacles.[1]

Grindylows can dwell in many aquatic areas, and they are known to infest regions from the tropical islands of the Shackles[2] all the way north to the ice-rimmed reaches of the Ivory Sea fringing the Crown of the World.[3]

Grindylows are indiscriminately violent and rapacious, and will attack settlements of merfolk and humans alike, as well as ships passing through their territory. While some travel in small groups, others form tribes of several dozen led by rangers, clerics, or barbarians.[1] Some are known to post skeletal trophies of their prey as "shepherds" near their territory.[2]

In much the same ways as goblins hate horses or dogs and domesticate goblin dogs, grindylows abhor squids of all sizes and consider them freaks of nature, while revering octopuses and devilfish as beautiful creatures and befriending them as companions.[1]