Sea drakes are marine drakes possessing powerful tails, fins, and webbed feet, to an overall effect reminiscent of a winged sea serpent. They typically inhabit coastal waters, and prey on animals and humanoids that come too close to the shore. They particularly favor humanoids on boats, which they enjoy capsizing to plunge their passengers into the water with them.[1][2]

Sea drakes are amphibious and can survive on land for indefinite periods of time, but they rarely leave the sea and spend most of their lives in the water.[1][2]

Sea drakes are more solitary than other drake species, and usually hunt alone. When they do form rampages, which can pose a great danger to shipping and coastal settlements, it is usually to hunt especially large prey.[2] 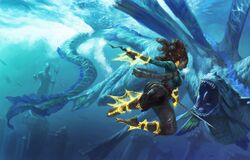 Mirian Raas in action under water versus a sea drake.

The Sodden Lands are home to a sea drake named Irith who abandoned the sea in favor of the brackish swamp. She rules over several tribes of boggards that she took control of after killing the mobogo they worshipped, and now rules them as queen and goddess.[3]