The half-elven race began (and still continues to a small degree) as the product of relationships between humans and elves, but has developed into a true-breeding race. Half-elves combine human and elven traits, and as a consequence tend to be considered outsiders by both races. On the other hand, the combination of human skill with elven beauty makes them good artists and entertainers as well as well-traveled adventurers.[1]

Half-elven males on average stand a few inches taller than human males, while half-elven women stand a good deal taller than their average human counterparts: about five to six inches. Half-elves are shorter than elves, and have pointed ears, although not nearly as elongated as those of their elven ancestors. They retain the lean build and comely appearance of the elves, while their skin, while fair, takes its color from their human lineage. Some half-elves look more like their human ancestors, while others favor their elven progenitors in appearance. This variance can often lead to social stigmas, as the more human-looking half-elves are more-easily accepted in human society, and vice versa.[2][3]

Most half-elves do not have one elven and one human parent, but come from such a pairing that is many generations in the past.[3] Others are born from two half-elven parents, or even a half-elf with a full elf or human. These different varieties are all still considered half-elven, although in appearance they may resemble one lineage more than the other.[4] 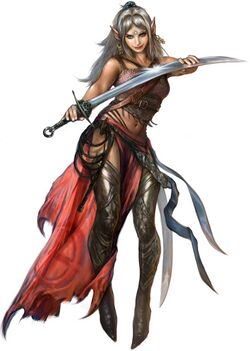 Most half-elves' ancestry traces back to the standard elven ethnicity found in such places as Kyonin or the Mierani Forest in Varisia. Half-elves from other elven cultures exist, and display distinctive features and attributes. Some of these half-elf heritages include:[5] 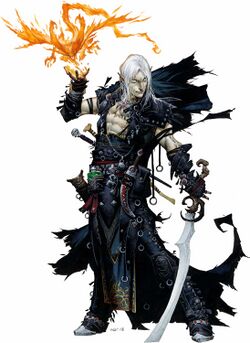 Because most half-elves do not fit completely into either human or elven culture, they tend to adapt to the society in which they feel most comfortable. This versatility makes them excellent survivors, and quite indispensable, as they work hard to seek acceptance from those around them. Among humans, half-elves are also appreciated for their elven beauty, height, and grace, while the elves appreciate in them the same traits they value in humans: spontaneity, freedom, and excitement. Their dual ancestry can create a conflict within them, as their elven and human sides clash, and their elongated elven sense of time finds itself in opposition to their human impulsivity. This conflict often leads to a mental fragility that belies their outward beauty, and often ends in madness.[3]

There is no such thing as a "standard" half-elven childhood. Many are born into loving families and nurturing communities that teach them their values, be they human or elven. Others are born into environments that are less supportive and understanding of their mixed nature, and in these, the half-elven child must constantly fight for acceptance and recognition. This need for self-reliance can often foster traits that serve them well in their search for their own meaning in life, apart from that of their birth community.[4]

Half-elves raised in human societies often have particularly difficult adolescences, as they mature slower than their siblings or friends. This can lead them to be scarred by experiences for which they are not emotionally mature enough. Similarly, those raised among the elves often become frustrated with their parents slow, dispassionate responses geared towards raising a child over the course of a century rather than a few decades. Such children often leave the elven communities early to try to find a faster-paced existence elsewhere.[4]

Half-elves who live among humans often keep their emotional distance, as they fear becoming too attached to their shorter-lived neighbors. Capable of living over 150 years, half-elves can watch three or more generations of humans come and go while they barely seem to age. Older half-elves will become nostalgic, spend their time reminiscing of people they have lost. Half-elves often adapt the customs, dress, and mannerisms of their adopted communities, while others prefer to stand out. Those who want to blend in often go to extremes to do so, and often develop mental issues in their effort to adapt.[3]

Most half-elves have learned both Taldane and Elven, no matter whether they grew up in human or elven communities. Their names are often drawn from a wide range of human or elven cultures, or else are unique. Many are quite ordinary, designed to blend in, or else carry Elven inflections. Cathran, Eandi, and Reda being common among women, and Gouard, Satinder, and Zirul among men.[3]

Being versatile creatures, half-elves worship a large selection of deities. Those with altruistic tendencies venerate such deities as Cayden Cailean, Desna, Sarenrae, or Shelyn, while those who take a more impartial viewpoint on the world worship Calistria, Irori, or Nethys. Half-elves who embrace their darker emotions find themselves drawn to Lamashtu or Zon-Kuthon.[3]

Although large parts of Golarion are unknown, it is safe to assume that half-elves live everywhere where their parent races co-exist. Even so, half-elves as a race do not have a country or region that they consider their homeland. Very few settlements even have a half-elf majority, although most live in human communities, often becoming artists or entertainers.[3] One exception is the town of Erages in Kyonin, where they exist separately from the full-blooded elves of that nation.[6]