Gnomes are a wounded race, not native to Golarion and far from ideally suited to life in the mundane world. Cast adrift from their original home, the realm of the fey known as the First World, the gnome race is still shaped by the spiritual damage caused by their exodus from a land of endless possibilities, to one firmly grounded in reality.[1]

A gnome is a short humanoid, one of the most bizarre and alien of the civilized races of Golarion. They tend to be around three feet in height and unnervingly slender, although slightly taller than halflings. Gnomes age as other mortals do (albeit more slowly than most, but not as slowly as elves),[2] but they also begin to suffer from a condition known as bleaching when they lose passion and fail to experience new things.[1]

Gnomes have long spindly fingers and large heads, which have a subtly different shape than those of other humanoids. Compared to their bodies, they have surprising toughness, as their bones are of a harder but lighter cast than those of humans. Their coloration, like their aging, is altered by experience. Their skin, hair, and eyes can run the complete gamut of colors that appear in nature, betraying their fey nature like no other characteristic. Many, though not all, have skin tones that match those of other humanoids who live in the region, often with tints of olive or gold. Their hair in particular is often vibrantly colored; expressing their recent history and experiences in reds, greens and more, as often (if not more so) than browns and blonds. They have very long expressive eyebrows above large, child-like eyes that can cause others to be more trusting and protective of gnomes. Some find these traits, along with the too-wide mouths and smiles, to be alien and frightening.[3] 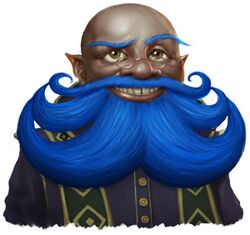 The First World, from which the gnomish race originally hails, is a land of wild imaginations and impossibility, where the Eldest of that plane have the power to reshape reality on a whim. Even though our own world has magic and other fantastical wonders, it is nevertheless based on a physical reality that is constant and unchanging. Because of their heritage, gnomes have difficulty coping with and accepting this reality, and must therefore constantly strive to innovate, dream, and take in new experiences. Those who fail to do so become bored and slowly accept our reality, succumbing to a condition only experienced by gnomes: the Bleaching. Those who suffer from this ailment slowly lose all color in their hair and skin, and eventually succumb to dementia or madness, and death. Those few who survive this ordeal become bleachlings. Because of their constant need for new experiences, gnomes are perceived by other races as being erratic, chaotic, daring, and innovative.[1]

Adventure is not so much a choice as a necessity for most gnomes. Adventuring gnomes often claim mementos, allowing them to remember and relive their most exciting stories. Their connection to magic makes them excellent spellcasters, especially ones wielding primal magic such as druid or primal sorcerer.[4]

The history of the gnome race does not begin on the world of Golarion, but in the First World, the realm of the fey. The gnomes were once an ancient, immortal, and mischievous fey race themselves, and were happy with life in their realm of endless wonder where they had eternity to indulge their curiosity and whimsy.[3] They are believed to have been closely related to leprechauns.[5] 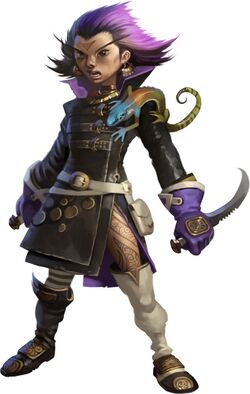 During the Age of Anguish (beginning in -4202 AR),[6] many gnomes left the First World and migrated to Golarion, although some gnomes remained behind, and continue to live an immortal existence there to this day. The reason for this migration is not clear. One plausible theory is that the ever-curious gnomes were intrigued by the cycle of death which occurred on the Material Plane. They travelled here in the hope of gaining souls and taking part in the cycle. This was denied to them, as only beings born on the Material Plane can gain souls. However, those who stayed and procreated found that their children had souls, and thus were able to pass on to the afterlife if they died.[7]

Other sources claim that the reason for their exodus was much darker, that a cataclysm similar to the fall of the Starstone that heralded the Age of Darkness forced them to flee the First World.[3] The Eldest Shyka believes that a large group of gnomes was expelled from the First World to the Material Plane by Pharasma for worshipping another Eldest, whose name has been long since forgotten, who stole a piece of the River of Souls to create a semblance of mortality on the First World as a game.[8]

Those gnomes who settled in the Darklands, rather than on the surface, changed over the following millennia and became svirfneblin (or deep gnomes). They claim to have been forced out of the First World by a calamity, for which they hold the dark fey of the Court of Ether at least partly responsible.[9]

The time after they first arrived in Golarion was a perilous time for the gnome race. This was when they first suffered from the Bleaching, which continues to claim many. They also lost their ability to manipulate shadow, and with their main form of defense gone, many gnomes fell victim to predators. During this period, gnomes were nearly rendered extinct. They eventually began to adapt to life on Golarion, forming enclaves to help protect them from the hostile world. Since then, gnomes have become an accepted part of life on Golarion.[3] 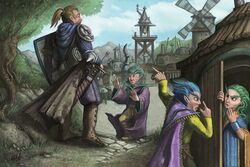 Due to their need to fend of the Bleaching (see above), most gnomes favor unusual hobbies and professions, and become attached to objects that "anchor" them to Golarion. These can take the form of friendships, stories, exotic outfits or perfumes, gadgets, or riddles.[1]

Although small pockets of gnomes can be found in nearly every corner of Golarion, in the Inner Sea region they are found most commonly in Cheliax, Katapesh, the Mwangi Expanse,† Nex, Osirion, the River Kingdoms, the Steaming Sea, and Varisia.[1] The Chelish city of Brastlewark, in particular, is thought to have the largest gnomish population in Avistan, if not all of Golarion.[10]

Most gnomes have numerous intimate relations during their lives, and long-term monogamy and its formality such as marriage is exceedingly rare.[1] Gnome relationships are ones of intention and choice, and this is true of reproduction, as well.[11]

Gnomes are not particularly fecund as a race, but many will at some point decide that starting a family—or at least, having a child—is a new and exciting adventure worth undertaking. Prudent gnomes will employ some form of contraception (either unnatural, or having sexual relations with other races) until they choose to procreate. This decision is generally left to the woman bearing the child. The gnome gestation period is highly variable, normally lasting anywhere from six months to a year, with no apparent ill effect. Children are born alert and full of color and life, and quickly progress to walking within six months.[11]

Most gnome families are loosely associated, with gnome children being raised as much by the larger community as by their birth parents. This "detached" relationship can appear even as negligence to other races, but is perfectly reasonable to gnomes.[11]

Male gnomes tend to have exceedingly long, hard-to-pronounce names. Female gnomes' names are mostly short, but some claim that that they are abbreviations of much longer ones. Common male names include Bastarger, Lumrolur, and Poshment, while popular female names include Besh, Dei, Pai, and Queck.[1]

Gnomes speak their racial language, which has one of the largest vocabularies on Golarion, but most also speak the Common tongue.[1][12]

Gnomes prefer gods that emphasize nature, magic, freedom, and beauty, including Cayden Cailean, Desna, Erastil, Gozreh, Nethys, Norgorber, and Shelyn.[1] These are all depicted as gnomes by their gnome worshipers. The svirfneblin goddess Nivi Rhombodazzle is the only unique gnome deity, and she is mostly unknown among surface gnomes.[13][14][15]

With its many pranks and practical jokes, Jestercap (celebrated on Lamashan 5th), is a favored holiday among the gnomes of Andoran, Druma, and Taldor.[16]

Paizo published a sourcebook about gnomes named Gnomes of Golarion.