The Elemental Plane of Fire, the Eternal Furnace, is the outermost of the elemental planes, encircling the Plane of Earth to one side, and bordering the Astral Plane to the other. It is a realm of vast, liquid oceans of flame, charred cinderlands, and flowing rivers of magma.[1] 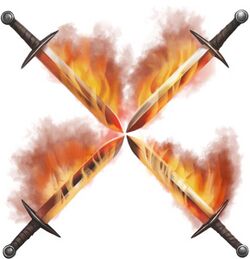 The unholy symbol of Ymeri.

The ruler of the Elemental Plane of Fire is Ymeri, Queen of the Inferno.[2]

Of all the elemental planes, the Plane of Fire is generally the most hostile to mortal life. It is a landscape of white hot heat, with rivers and seas of fire, lava and molten metal, mountains of compacted ash, and burning skies filled with smoke and curtains of flame.[3][4][5]

The City of Brass is one of the most well-known settlements in the Great Beyond. Constructed on enormous brass plates which float suspended on a sea of fire, it is a place of byzantine courtly intrigues and deadly dangers, but also serves as one of the easiest locations for outsiders to the plane to gather information and conduct business. The city (and by extension, all efreet) were ruled by the Sultan Hakim Khalid Suleiman XXIII, Lord of Flame and Khan of Magma,[3][6] and now by Grand Sultana Ayasellah Mihelar Khalidlah II.[7]

Counter-intuitively, the Plane of Fire has the most varied forms of life of any of the elemental planes. It is home not only to countless fire elementals, but also to the efreet, an evil race of genies who dwell in the fabled City of Brass. They war with the kingdoms of the fire mephits and their enslaved azer.[1][3]

In Golarion's legends and myths, the efreet are depicted as conniving tricksters who con mortals into making disastrous bargains for the promise of wealth and power. These stories are not far from the truth, as these evil inhabitants of the Plane of Fire possess an inherent belief in their own racial superiority. These prejudices exempt the efreet from feeling any remorse or responsibility towards other creatures, and continue to fuel their ongoing wars against the native mephits and the shaitan of the Plane of Earth.[4]

The native fire mephits live in a strict theocracy controlled by Dirimalia VI, who rules over her people from the Ninefold Towers of the Matriarch of Holy Sublimation. These towers are made from quartz crystal with variegated veins of liquid copper running throughout. The mephits claim that the towers were gifts from the draconic Crystalline Emperors of the Plane of Earth, while the efreet maintain that they were given to them by the shaitan. The fire mephits are served by their azer slaves, whose civilization they conquered eons ago.[3][6]

Numerous creatures beyond the efreet, fire mephits and azer call the Eternal Furnace home. Fire and magma elementals abound throughout the plane, as do small magmin enclaves. Salamanders, magma dragons and rasts all have presences in the Plane of Fire as well.[5] The enormous, wormlike thoqquas can be found along the borders of the Plane of Fire with the Plane of Earth,[8] as can amorphous magma oozes.[9] Fire whales originated on this plane, and pods of their kind can still be found swimming through the plane's fires.[10]

Paizo published a chapter about the Plane of Fire in Planes of Power.