Isger (pronounced IZ-guhr)[1] is a vassal state of Cheliax. In the eyes of Cheliax it is not so much a sovereign nation as a glorified trade route.[2]

Isger was founded in 2133 AR, after Taldor's Seventh Army of Exploration defeated its indigenous inhabitants, the Isgeri. The Isgeri fought the Taldans tenaciously, but were eventually conquered and pacified. In recognition of their great courage and determination, the Taldan crown named their newest province after the tribe.[2]

The dwarven nation of Tar Khadurrm was founded in 3279 AR in the Five Kings Mountains southeast of Isger, and its capital, Jernashall, became an important center of trade in the region. It became so important that the governments of the Taldan provinces of Isger and Cheliax petitioned the dwarves to build a surface city to increase their access to dwarven goods and services. Raseri Kanton was built as a sister-city of Jernashall in 3451 AR and quickly became a trade centre for over 500 years, until both cities were destroyed by the eruption of the volcano Droskar's Crag in 3980 AR.[3]

Isger remained a thrall of Taldor for nearly two thousand years, until another Taldan province, Cheliax, broke free from their imperial masters during the Even-Tongued Conquest. In 4081 AR, Cheliax wrested control of Isger from Taldor, and Isger has remained a vassal state of Cheliax ever since. Even when several other vassal states, such as Andoran and Galt, successfully rebelled against Cheliax in the 47th century AR, Isger remained firmly within Cheliax's grasp.[2]

As a vassal state of first Taldor and later Cheliax, Isger's natural resources were heavily exploited over the millennia. Eventually the only thing the state had to offer its imperial masters was its valuable location as a trade route between Cheliax and the rich nations bordering Lake Encarthan to the northeast. This route led up the Conerica River from Cheliax, past the capital of Elidir, and from there overland into the nation of Druma. As a result, the Isgeri government has concentrated most of its resources to the communities on the Conerica, leaving the rest of the nation to become an impoverished, bandit-infested hinterland.[2]

Isger suffered terribly during the Goblinblood Wars when hundreds of tribes of goblinoids (including powerful hobgoblin warlords and their goblin slaves) emerged from the Chitterwood in southern Isger in 4697 AR, killing all in their path. Isger's army was unable to stem the invasion. The goblins were eventually defeated by an unlikely alliance of military forces from neighbouring nations, including the Eagle Knights of Andoran, the Hellknights of Cheliax, and the Mercenary League of Druma. Each fought to keep the goblinoid forces from overrunning Isger and spilling out into their respective countries.[4][5][2] With the enemy armies defeated, the victors put much of the Chitterwood to the torch in an attempt to deprive the goblinoids of a home. Although thousands of goblins died in the conflagration, many fled into the caverns below the forest and survived.[4]

The Goblinblood Wars were marked by heavy losses on both sides, especially among the Isgeri, and thousands of orphans were left to fend for themselves after hostilities ceased. Their numbers even continued to rise in the post-war period, as chaos and banditry swept through Isger's hinterlands. The only organization who stepped in to help these orphans was the church of Asmodeus supported by Cheliax's House Thrune. They built a number of monasteries throughout the country where they fed, clothed, and indoctrinated Isger's youth into the faith of the Prince of Law. The most famous of these is the monastery run by the Sisters of the Golden Erinyes, where children are not only schooled in infernal philosophy and politics, but also in hard-to-master martial arts.[6]

Trade caravans have recently reported strange sightings near the village of Gillamoor on the edge of the Chitterwood. It seems that its inhabitants were transformed into ravenous undead, and that this so-called Gillamoor Plague has spread to other nearby villages as well. The plague is blamed on necromancers and powerful priests of Urgathoa, who are believed to have taken advantage of the chaos in Isger's hinterlands following the Goblinblood Wars. Some believe that the most powerful of those infecting the countryside is a diabolist named Lady Kaltessa Iyis, a cleric of the archdevil Mammon. Lady Iyis is even rumored to secretly control Isger's rulers and be building an undead armies from the dead of the Goblinblood Wars.[6]

Isger is officially ruled by Steward Hedvend VI, but it is an open secret that he takes his orders from Cheliax's House Thrune. Hedvend is regularly summoned to Egorian, Cheliax's capital, to receive his instructions. The emblem of the office of the steward of Isger is a bejeweled, yet fully expended rod of rulership, symbolizing the apparent grandeur of a position with little (if any) true power.[6]

As one of the last remaining Chelish colonies, Isger naturally has poor relations with its mother country's main rival in the region: Andoran. Due to the devastation caused by the Goblinblood Wars, however, Isger has not been able to cause much trouble for the fledgling democracy.[7]

The descent of much of the nation's hinterlands into banditry and lawlessness since the end of the Goblinblood Wars has also impacted its neighbors. The dwarves of the nearby Five Kings Mountains have begun to complain to the Isgeri government that large groups of bandits have begun to trickle over the borders into their territory.[8] 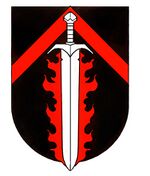 Emblem of the Isgeri army

Isger lacks a proper standing army following the losses suffered during the Goblinblood Wars. As the army is too small to effectively protect all of the country, it now limits its patrols to the important trade routes, such as the Conerica Straits. In an attempt to curb the banditry which is now rife in outlying areas, the steward has issued bounties on the known brigands. It is not yet clear whether this is having the desired effect, but the steward continues to give the impression that he doesn't much care what happens outside of the country's trade routes.[4] Because Cheliax is only interested in keeping the trade route through Isger open, it provides little material support to the army of its client nation.[2]

Although they are not part of the Isgeri armed forces, the Hellknight Order of the Pike has been expanding their monster-slaying expeditions into Isger from their headquarters at Citadel Ordeial in northern Cheliax.[9]

Isger lies between two of the most powerful economies of Avistan: the merchant Kalistocracy of Druma to the north and Cheliax to the south. Isger also controls the only gap between the Five Kings Mountains and the Menador Mountains. As a result, Isger has the Conerica Straits, one of the most profitable trade routes in Avistan, running through the centre of it.[4]

Much of the Chitterwood was burnt in the aftermath of the Goblinblood Wars, but it still remains as a geographical feature. Beneath the forest, goblin tribes remain in the Caverns of Chitterwood, perhaps gathering their forces for another invasion.[4]

Although Isger is a landlocked country, it has numerous large and navigable rivers passing through it. These include the Conerica River and the Keld.[11]

The people of Isger are still suffering from the devastation of the Goblinblood Wars. The wars left behind thousands of orphans who have been left to the tender mercies of the Church of Asmodeus. A number of monasteries have been established to care for the orphans, and indoctrinate them in the ways of the Prince of Devils.[4] Apart from the country's dominant human citizens, Isger also contains Umok, a predominantly gnomish town,[12] and has one of the larger halfling populations in the region. Most of the latter group are held as slaves,[13][14] and many are bought by the Church of Asmodeus to work in their orphanages.[15] Even though the Goblinblood Wars killed thousands of their kind, Isger is still a major center of goblinoid culture in Avistan.[16]

Isger is home to a large number of freedom-loving copper dragons who fight a guerrilla war against the Isgeri government in an effort to end their tyranny. Most of these dragons immigrated from Andoran recently when their presence there threatened the economy and ecosystem.[17] Southern Isger is also occasionally threatened by the great red dragon Daralathyxl who lairs in the Five Kings Mountains to the southeast. These events are rare, but always disastrous, as the great wyrm is one of the most powerful of his kind on Golarion.[18]

Related to these dragons, attacks by flame drakes from the Darkmoon Vale region of Andoran have begun raiding southeastern Isger through the Isger Pass.[19]

On a more mundane level, southern Isger is also home to a well-known vulpine, the firefoot fennec. These small, fox-like creatures are sometimes domesticated and traded as pets, as they are seen as symbols of good luck.[20]

Being a thrall of the nation of Cheliax, Isger shares many cultural similarities with its mother country. These include the celebration of Chelish holidays, such as Loyalty Day.[21]

Isger's most prominent religion is naturally that of Asmodeus, along with the practice of more generic diabolism. Other important faiths include that if Erastil,[2] as well as Milani.[23]