The minor goddess Milani (pronounced meh-LAW-nee),[1] also known as the Everbloom, is the patron of all those who fight against oppression and unjust rule.[2] Her symbol is a rose growing out of a blood-soaked street.[3]

Until the death of Aroden in 4606 AR, the goddess Milani was simply one of dozens of saints within the Last Azlanti's faith. She was the beacon of hope to all those who fought against repressive regimes, giving courage to those who had little but their desire to live a free life. The death of her patron, combined with the tremendous upheaval and suffering that followed his death, gave her a focus and attracted many new followers. Those devoted to her found the courage to organize the rebellions against the infernal takeover of the Chelish Empire, helping many of her outlying territories break free of its control. They fought against the slow slide into barbarism, restoring people's hope that a just and good society could be restored. Milani has never been as popular as Aroden's other followers, such as Iomedae, perhaps because the Inheritor's worship had already been firmly established before their patron's passing.[2]

Milani has two realms: Milani's Garden in Elysium, where she spends most of her time, and the Refuge of the Red Rose in Axis, a small corner located within the collapsing divine realm of Aroden.[4][5][6] Only a few square miles in size, the Refuge of the Red Rose sits near the center of her former patron's realm. From here she gives aid to all those fighting oppression and evil, strives to mitigate the institutionalised inequality in Axis, and seeks to relocate the downtrodden to friendlier places.[7][8] 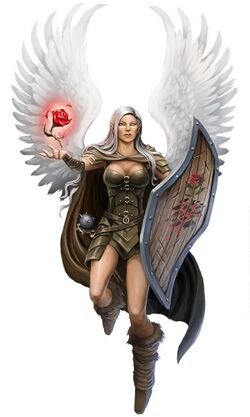 A depiction of Milani.

Milani and her clergy are generally on good terms with the more benevolent deities:

Cayden Cailean
Cayden is seen as a true ally in the quest for freedom.[9] Thais, the herald of Cayden Cailean, uses an ancient halberd which she borrowed from the Everbloom's arsenal.[10]
Desna
Desna is seen as supporting Milani's portfolio interest of hope.[9]
Erastil
Erastil, like Torag, is seen as a god who supports communities.[9]
Iomedae
Iomedae and Milani were both servitors of Aroden,[9] so Iomedae and her followers are held in the highest regard. The Inheritor herself refers to Milani as her 'sister', and she is always ready to support her should the need arise.[11]
Kurgess
Milani appreciates the humble beginnings of the demigod Kurgess, and his wish to aid those in need.[9]
Sarenrae
Milani's relationship with Sarenrae and her church is much more complicated than those with other benign religions. Milani is simply disgusted with the acceptance of slavery by many of the Dawnflower's followers, especially those of Qadira; yet Sarenrae is more powerful than Milani and clearly a force for good. This tension leads to an awkwardness and a more formal relationship than that which she enjoys with other good-aligned deities.[9]
Shelyn
Associated with Milani's portfolio interest in devotion, Shelyn is seen as the inspiration for perfect devotion.[9]
Torag
Torag, like Erastil, is seen as a god who supports communities.[9]

Milani's history and half-elven heritage leaves her feeling embarrassed and annoyed with the minor god members of the elven pantheon, despite similar alignments. She deals with this by simply ignoring them for the most part, unless communication is critically necessary.[9]

Asmodeus and Zon-Kuthon are Milani's arch-enemies, though she cleverly uses her lowly power to avoid their attention and that of other evil deities. She battles against all of them, often utilizing mortals to confound the evil these gods would wreak.[9]

Her church is generally most popular in areas of intense upheaval such as Galt, the River Kingdoms, and parts of Cheliax,[3][13] and generally only gather in small congregations.[14] In peacetime, her followers demonstrate their obedience by planting and cultivating roses or brewing and sharing tea, then praying to her while inhaling their scent. During conflicts, Milanites train for battle alongside their allies.[13]

Clergy in service to Milani generally have intense periods of work and proselytizing in troubled regions followed by years of tranquillity once they achieve their goals. They are aware that their calling often ends in martyrdom, and it is a common belief that those who are strong of faith will return again to continue the fight. Many clerics of Milani believe that they are a new incarnation of a martyr of the church, and can in fact access memories from their previous lives.[15]

Milani's holy text is The Light of Hope often split into two sections:

Traditionally, pressed roses serve as bookmarks in the text and rose petals are placed in the book to mark special pages when the text is given as a gift.[16]

There are no particularly Milanite holidays observed by her church; instead the church tends to celebrate anniversaries of local triumph over oppression by civilians, and mark the deaths of local heroes. The church does participate in a moment of silence for Aroden on Foundation Day in recognition of Aroden's canonization of Milani. Other recognized holidays marked by her church are:

One revolutionary holiday notable for the church's distinct refusal to celebrate it is All Kings Day, as Milani loathes the Red Revolution of Galt and its associated tyranny and violence.[17]

Paizo published major articles about Milani and her church in The Shackled Hut and Inner Sea Faiths.