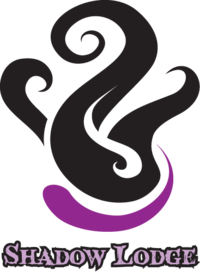 Logo of the Shadow Lodge faction.

Season 2 of the Pathfinder Society Roleplaying Guild campaign ran from August 2010 to July 2011. The season is referred to as the Year of the Shadow Lodge due to the prominent appearances of a rogue group of Pathfinders called the Shadow Lodge and the Pathfinder Society's attempts in bringing them back into the fold over the course of the season's plot. At the start of this season, no new factions were introduced.

When the Society arrives to offer assistance to a society contact in Whitethrone, Rognvald Skagni, the society realizes that the Shadow Lodge has gotten to him to try and use him as a bargaining chip for critical political information.[4] The Shadow Lodge, able to act on some of Rognvald's research notes, head deep into the frozen north in search for an ancient artifact to use against the society. The Pathfinder society pursues the Shadow Lodge into the city where the Shadow Lodge has convinced the town to ban any presence of the Pathfinder Society. After careful negotiations, the Pathfinders are allowed inside the town and find the Shadow Lodge's hidden base under a brewery. Inside, they locate documentation regarding the Shadow Lodge's current trek in the north to a location called Keep of the Huscarl King, that houses an ancient weapon, Jedrek's Shard.[5] Hot on the Shadow Lodge's trail, but still having quite a distance between them, the Pathfinder Society meets a local barbarian tribe that, after telling them of their worthiness, provide the Pathfinders a shortcut to the keep that allows them to arrive just as the Shadow Lodge does. After an intense battle with the Shadow Lodge, the Pathfinders prevail and are given a choice about the outcome of Jedrek's Shard.[6] Shadow Lodge member and heir to one of Taldor's most wealthiest families, Chalfon Dalsine, catches Oppara Venture-Captain Muesello using illegal Sarenite cultists to smuggle artifacts out of Taldor and attempts to get the Society banned from Taldor because of it. The Decemvirate sends a group of Pathfinder agents to help Muesello out of this situation and attempt to reason with the officals of Taldor. Chalfon catches wind of the Pathfinder's actions and then, in a fury, kills the sister of Qadira faction leader, Muhlia al'Jakri. This leads to Muhlia al'Jakri killing Jacquo Dalsine, which forces her to retire.[7]

The Pathfinder Society locate an ancient magic under the Terwa Uplands and in turn, send an expedition out to research more about this new and strange magic. However, the expedition is attacked and left without any food or supplies as well as any ways to communicate to other agents for more supplies. A team of Pathfinder agents are sent to the nearest town, Bloodcove, to supply a caravan and then escort it to the expedition site.[12] After arriving with a fully stocked caravan at the expedition site, the Pathfinder agents are shown the ancient magics that allow one to control ancient azlanti artifacts. Their find is cut short, as the site is attacked by inhabitants of the uplands and the Pathfinders are forced to test the artifact's strength. After defending the camp, the Pathfinders pack up and head back to Absalom with research and notes of their findings.[13]

Part three and four of the Eyes of the Ten series take place in this season.[15][16] Pathfinders are sent to the Mindspin Mountains to gather regents from a mystic, Phitoness of Axioms, in order to possibly cure a cursed Venture-Captain from an ancient affliction of dark magics. Arriving in the mountains, the Pathfinders are sent to the Chasm of Screams where the Phitoness of Axioms has been taken. After clearing the chasm of it's denizens, they are able to rescue the Phitoness and she agrees to help the Pathfinders because of their actions.[17]

Pathfinders are sent to a small lake-town named Stom's Claim to recover an inscribed silver bar. As they arrive in the town, they are notified that those same silver bars are needed to contain ancient evil that was once played in the lake next to the city. With the help of the local clergy, the Pathfinders work to contain the evil in the lake just as it attempts to overtake the village.[18]

After a plague strikes the city of Manaket, a group of Pathfinder agents are requested to help smuggle a cleric inside the city in order to help battle the plague. The Pathfinders, traversing smuggler tunnels under the city, come in contact with a small cult worshiping an evil deity and attack the Pathfinders. The Pathfinders dispatch this evil and make their way into the town proper where they find transportation that will lead them deeper into the city. [20] Having made it into the city successfully, the Pathfinders are requested to locate a different group of Pathfinders who were on the same mission, before they went missing. Following the missing Pathfinders clues, they locate an archaic tomb which holds ancient evil inside that if destroyed, could rid the city of it's plague. Possibly ending the threat of the plague, the Pathfinders locate an artifact of immense power.[21] After researching the found artifact, Pathfinders are sent to the legendary Citadel of the Weary Sky to finish the mission that the missing Pathfinders started. Deep into the citadel the Pathfinders encounter groups of Shadow Lodge agents and dispatch them. At the peak of the citadel, the Pathfinders encounter a div that is using compulsion magic to control a group of mercenaries to attack them. The Pathfinders defeat the div and offer the mercenaries a chance to leave the citadel. The Pathfinders locate a ring on one of the Shadow lodge agents that belonged to the Sapphire Sage, Amenopheus, implying some involvement with the Shadow Lodge. (Refer to paragraph 3 above for more information on how this affects the season plot)[22]

Pathfinders are sent to locate a missing Pathfinder prodigy, Zahra, lost in a ruined forge city of Koor. Arriving, they find a hidden vault inside that houses ancient magics and traps. Overcoming these obstacles, they locate the missing Pathfinder that has succumbed to evil magic that has given her unimaginable power. The Pathfinders defeat the evil and realize that Zahra had been afflicted with an ancient genie curse.[23]

Pathfinder agents are sent to the Monastery of the Unrelenting Tide to recover a magical manuscript, Fleshforge Manuscript, in Nex. Arriving at the monastery, the Pathfinders realize that the entire temple is dominated by a magical force and must combine three different sections of the manuscript together to end it's evil domination. After recovering the relic, a ghost dryad sorcerer by the name of Jathyl attacks the Pathfinders, igniting the entire temple ablaze. After putting Jathyl's soul to rest, the Pathfinders are able to take the relic back to Absalom.[25]

The Pathfinders help the Blakros family welch on a deal with the Obsidian Order of the Shadow Plane, saving twins Michellia and Eleanir Blakros.[26]

The following adventures were released as part of Season 2. This table may be sorted by scenario number, title, level tier, metaplot arc, venture-captain (or other official) assigning the mission, location, or country.