Gnolls, or hyenafolk, are a humanoid race renowned for their tremendous laziness, and fierce savagery. Structuring themselves into packs, gnolls survive through raiding and pillaging and acquiring slaves who facilitate their slothful lifestyles.

Large and powerfully built, gnolls appear as a profane hybrid of man and hyena that stands taller, bulkier and furrier than man. The gnoll's stance is probably its most human feature, it stands upright like a human though with a noticeable hyena-like hunch to its back. Their torso is also more human than hyena, though still covered in the mangy fur and the gnoll's muscular arms end in clawed, human hands capable of any manipulation a human could do. Gnolls' legs have the double jointed legs of a hyena, this gives them an odd lopping-hopping gait when they run on their hind legs. Though capable of walking upright, a gnoll's canine-like hindquarters allow it to drop to all fours like a dog for greater mobility. A gnoll's head is its most hyena-like feature possessing the hyena's short, blunt muzzle, their muscular, bone-crunching jaws, their black eyes and their rounded ears.[1]

Some gnolls leave their clans to work as mercenaries and adventurers, learning new skills, earning wealth, and gaining allies that will one day benefit their people. Other adventuring gnolls have no clan, left orphaned by some disaster or exiled, fairly or not, for some crime. All gnolls are strongly pack-minded and tend to adopt their friends as honorary gnolls and packmates. The ranger is the archetypal gnoll class, a cunning warrior of the wilderness, but gnolls also make excellent barbarians and fighters, and their love of clever tricks make them outstanding rogues. Bonekeepers are usually witches, treating ancestral spirits more like squabbling colleagues than objects of worship, while storytellers are typically bards.[2]

Gnolls can be found in Avistan, Garund and across Casmaron, although they are most common in the hot deserts of Garund and Casmaron.[3] Gnolls prefer hot deserts and warm plains, although they can also be found in warm mountains and sunny forests, and sometimes even underground.[4] Gnolls are at their most numerous in the deserts and mountains of Katapesh, which they consider their god-given homeland, and barely tolerate its other more civilised inhabitants. So numerous are the gnolls of Katapesh that an entire district of the capital, Dog Town, is devoted to them and the slave trade they bring in.[5] Gnolls can also be found amongst the deserts of Osirion, Thuvia and Rahadoum. They used to be found in Nex, Geb and the deserts that are now the Mana Wastes; however, centuries of magical warfare drove the gnolls that once dwelt there to seek safer pastures. Gnolls are less common in Avistan, generally sticking to warm forests and plains rather than deserts; they can be found in small bands in the wilds of the disorganized River Kingdoms and chaotic Galt, but also live in the more organised Razmiran and even in parts of Kyonin. Avistani gnolls have been on the decline ever since the fall of ancient Thassilon; before Earthfall, they were citizens of Haruka, the domain of Krune, Runelord of Sloth, where their laziness was appreciated and they served as fearsome slave drivers valued, as well as scouts and forward observers in Krune's armies. With the Earthfall, the gnolls' population was halved and most fled what would become Varisia in order to find easier hunting grounds.[6] 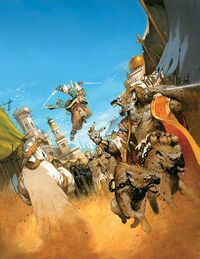 A gnoll and his pet hyenas fighting in Katapesh.

Gnolls, despite their intelligence, interact with the natural world more like animals rather than humanoids as they do not alter their environment.[1] In fact, despite their vicious nature, they are normally good for the surrounding environment as they are scavengers without compare, happily wolfing down rancid carrion left by more discerning creatures. While capable predators the average gnoll hunter does very little actual hunting as that requires too much effort, they much prefer to drive weaker predators from their kills though the prospect of more slaves is enough to rouse them to action. Gnolls apply this scavenging to looting and stealing clothes, armour, weapons, even their homes from others. Perhaps it is no wonder that gnolls are such prolific slavers when they have no interest in doing anything labour intensive themselves.[7]

A gnoll's life is comparatively short and violent, starting life as pups they are not normally born naturally instead their mother is given a crude, brutal caesarian as they are ripped from the womb in their first tribute to the Mother of Monsters. Very rarely a gnoll pup chews its way free from its mother's womb, such a vicious gnoll is destined for greatness becoming powerful leaders of many, many tribes. Normally gnoll pups are delivered in litters of between three and five, young gnolls are dangerous by three and physically fully matured by eight years old. Females are normally fertile by ten, unlucky females mature slower, some not becoming fertile until they are eighteen. This is a problem as in gnoll culture those who have not given birth or been favoured by the goddess by fifteen are sacrificed to appease her. The average life span of a gnoll is twenty eight and while most make it into their thirties many die young from violence, only the most canny and lucky gnolls ever see their fortieth birthday.[1] 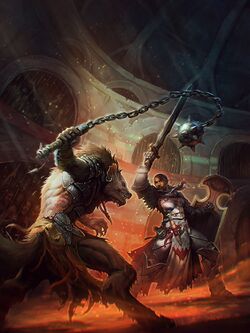 For gnolls the pack is everything, none would chose a life alone,[4] gnolls always travel in packs, normally with a single male leader who takes on a lofty, often pretentious title like "Emperor", "Consort of Lamashtu" or "King of all Gnolls", the leader maintains their position through violence and their authority extends only as far as their claws can reach. Gnolls normally rove in small packs of a few hunters, though their definition of hunting is more like scavenging.[1] Typically these tribes only grow as large as two hundred[3] but they can get much larger when led by a truly exceptional leader like the Carrion King. Every region infested with gnolls has one larger, more successful band led by the strongest gnoll whose influence can be felt throughout the region. Despite their vicious natures, gnolls rarely war amongst themselves seeing little to be gained from it as gnolls never take other gnolls as slaves.[7] Despite their chaotic nature, gnoll society has a strict set of laws that revolve around the group: from birth gnolls are taught that the good of the pack outweighs that of the individual. These laws are deeply skewed as there is no punishment for killing a non-gnoll (unless he was a pack mate's slave) while forcing another gnoll to work incurs the harshest penalty. In gnoll society one punishment is feared above all, exile, it is considered worse than death to be condemned to endless loneliness. Those exiled either seek new companions amongst non-gnolls like orcs or trolls or seek death swift and final. When exiled the gnoll is shaved and then scarred to forever mark him as banished, only the most heinous crimes are punished by exile; forcing a gnoll to work, betraying gnolls to their racial enemies, worshipping a deity not associated with Lamashtu or freeing a slave.[8]

The Pale Mountain is located near the junction of the Brazen Peaks and the Barrier Wall of northwest Katapesh. It is avoided by travellers as it is known to be the haunt of numerous tribes of gnolls, ruled by the Carrion King.[9] From his throne upon Pale Mountain's slopes, the Carrion King commands hundreds of gnolls. Among the ramshackle hordes, bands of raiders and slavers, and lone murderers, four noteworthy tribes serve the warlord: Al'Chorhaiv, The Circle, Three Jaws and Wormhollow.[10] 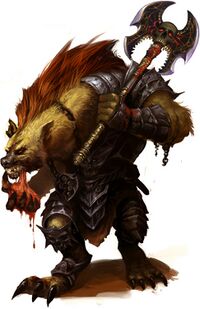 An Unchosen gnoll known as the Carrion King.

Gnolls are devout followers of Lamashtu, the Mother of Monsters and reverence for her suffuses nearly all aspects of life. This worship somewhat conflicts with gnolls' society's misogynistic tendencies but also strictly defines the female's role: they are either holy priestess or sacred mother, if they are neither then they are sacrificed to appease Lamashtu. The gnoll priesthood can be split into the female clerics and the male shamans. The females generally perform the more ritualistic aspects of worship like preparing sacrifices, overseeing births and hunting down heretics; male shamans tend to more common activities like unholy sermons and casting healing spells. Gnoll priestesses regard themselves as mothers of their flock serving as teachers and caretakers of their pack; this is not always figurative as they view giving birth to monstrous offspring as a sacred duty and are notoriously fecund. Most priestesses spend much of their life pregnant with their distended bellies bearing the scars of violent births.[7] In an attempt to mimic their goddess's form male shamans go through a ritual trepanation to open up a hole, supposedly a mystical third eye, in the middle of their forehead; they sometimes even fill this new orifice with eyes stolen from sacrificial victims.[8]