Bridgefront is on the coast on the far side of Endrin Isle, shown to the right of this picture of the city of Korvosa. 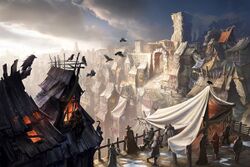 Bridgefront is the poorest ward in the Varisian city of Korvosa lying in the district of Old Korvosa. It lies on a tiny sliver of land between the imposing Garrison Hill to the north, and the Narrows of Saint Alika to the south, barely three streets deep; to the east lies the larger ward of Old Dock. When its inhabitants ran out of new real-estate long ago, they began to build up, constructing shabby, wooden lean-tos on top of existing buildings. These flimsy floors were eventually connected to each other via ladders, ropes, and long poles, even across city streets, and grew into a new pseudo-district known as the Shingles.[1][2]

Paizo has published a Gazetteer of Bridgefront and a poster map in The House on Hook Street.