This page contains spoilers for the following products: Curse of the Crimson Throne Adventure Path - Escape from Old Korvosa.

The Sable Company, or Sable Company Mercenaries, of Korvosa is an elite, hippogriff-mounted company of marines. The commandant of the Company does not answer to the ruling monarch of the city-state, instead reporting directly to the Seneschal of Castle Korvosa.[1] While the Korvosan Guard patrols the streets of the city, the Sable Company has jurisdiction over the skies and waters around Korvosa. The two organizations work closely together and the marines rely on their ties with the Guard to further coordinate efforts with the Hellknights and the Acadamae, both of whom are not on good terms with the Sable Company.

Occasionally, the Sable Company pre-emptively strikes at the city's foes. They are known to employ spies placed in key locations throughout the region in order to monitor potential enemies, such as pirates, smugglers and Shoanti raiders.[1] One infamous failure of this tactic was when the mutilated body of an agent was left in Korvosa's busiest marketplace, a warning from the Riddleport crimelord, Clegg Zincher.[2]

The last commandant of the Sable Company was Marcus Thalassinus Endrin, who was killed while attempting to assassinate Queen Ileosa Arabasti in 4708 AR.[3] 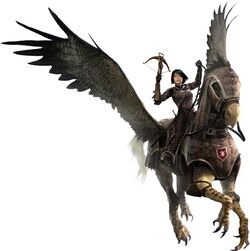 Sable Company marines graduate from the elite hippogriff-riding school of the Endrin Military Academy based at the Great Tower in the Heights District of Korvosa. Marines are rangers or paladins who ride hippogriffs with great skill, having formed a close bond with a particular mount. They are fiercely loyal to the Sable Company and one another and act as aerial dragoons for the protection of the city.[4][5]