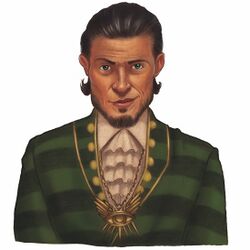 Ridonport is a small coastal city located in the empire of Taldor, south of the city of Cassomir. The settlement is best known as the home of General Arnisant, the Taldan hero responsible for imprisoning the Whispering Tyrant.[2]

The city of Ridonport is located on the Inner Sea coast of Taldor, built on a natural harbor in the region known as the Jagged Saw. Its position lies almost directly south of Cassomir, the only other natural Taldan harbor, and the community supports itself with work from its larger neighbor.[2][3]

An enormous statue to General Arnisant, hero of the Shining Crusade, stands in the town's main square. Two hundred feet tall and built of solid marble, it is a true testament to the pride the town feels for its most famous son.[2]

Within view of the statue stands the General Arnisant Museum and Historical Residence, a spacious, single-level house made of stone that celebrates Arnisant's contribution to the Shining Crusade. Although mostly funded through donations, Earl Calhadion Vernisant sometimes procures items for himself while leaving behind ostensibly historic artefacts that are in fact designed to promote himself and his lineage. The curator, Cincia Reviamo, is irritated by the Earl's blatant propaganda and disrespect for history.[4]

Ridonport possesses a limited infrastructure; the primary focus of industry in the community is the support of the Taldan Imperial Navy, which uses the city's harbor to dock a portion of its ships when the port of Cassomir is full.[2]