This page contains spoilers for the following products: Curse of the Crimson Throne Adventure Path.

Queen Ileosa Arabasti (pronounced ihl-ee-OH-sah air-ah-BAS-tee)[1] was the most recent monarch of the Varisian city of Korvosa. She was killed when it was discovered that she was attempting to sacrifice her subjects in order to achieve immortality.[2][3]

Ileosa is said to have been an exceptionally beautiful young woman with dark red hair, skin as white as porcelain, and a face that few mortals could equal.[4] 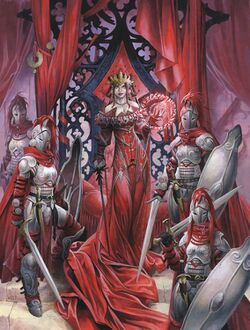 Queen Ileosa Arabasti in her throne room guarded by the Gray Maidens.

Ileosa Arbasti was born Ileosa Arvanxi to one of Cheliax's most powerful families in Westcrown. Instead of marrying a wealthy Chelish nobleman, as was expected of her, she rejected her family's authority and moved to Korvosa, scandalizing her family by the abandonment.[5] Having studied King Eodred Arabasti II for some time, she was quickly able to seduce him. After falling in love with the beautiful young girl and a scandalously short courtship, he married her in 4704 AR.[4]

As queen, Ileosa held much of the city in open contempt, and was accordingly not well-liked among the populace. After murdering her husband with poison acquired from the Red Mantis assassins, she proceeded to squash any opposition to her ascension, up to and including fostering a devastating Blood Veil epidemic, and cutting off Old Korvosa from the mainland. Much of her ascension can be attributed to the power she drew from the Fangs of Kazavon, a relic she found in the ruins beneath Castle Korvosa.[4]

After stealing the keys to Castle Korvosa's treasury from the Seneschal Neolandus Kalepopolis, she discovered a secret room. Not able to read the Shoanti rules of warning, she opened an old stone coffer containing the partial remains of the dread wyrm Kazavon. Its spirit quickly fused with that of the young queen, changing her forever. It destroyed any lingering cowardice in her, turning her into something wholly calculating and evil.[4] 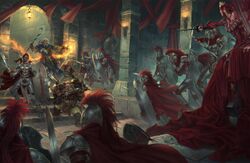 The Gray Maidens protect their queen.

Guided by the dead dragon's spirit, Queen Ileosa quickly put new plans into motion in an effort to gather all of Korvosa's power to herself. Her first obstacle was her husband, King Eodred. Despite her most fervent wishes, the old man was still in good health, and showed no signs of wanting to divest himself of power. Ileosa contacted the Red Mantis assassins, but was rebuffed due to their policy of not targeting legitimate heads of state.[4]

Undeterred by this setback, the Queen instead focused her attention on a figure near the king whom she thought she could get to do her dirty work: his half-brother Venster. Hidden away in a tower of Castle Korvosa because of his parentage, Venster was deeply jealous of the king, but occasionally would play cards with him. Ileosa sought him out and quickly seduced him. From there it was easy enough to turn him against the king.

Following the seduction, Ileosa procured a special poison from her Red Mantis contacts who, although unwilling to actually murder a monarch themselves, were happy to help someone else to do it. This poison, administered by coating a deck of playing cards with it and trusting Eodred's habit of biting his nails to deliver it to him, created the appearance of a severe and incurable form of leprosy, which eventually killed King Eodred in 4708 AR.[4]

After the poison was administered, Ileosa ceased to have a use for Venster and cut off further interaction with him. After Venster threatened to expose her deeds unless she gave him the companionship he desired, she had him murdered and walled up in the dungeons of Castle Korvosa. Although Ileosa trusted that Venster's solitary habits would prevent anyone from noticing his disappearance, Neolandus, who had been observing the queen since the theft of his keys, took notice of Venster's sudden absence. He confronted the queen in person, a mistake that resulted in Ileosa sending the Red Mantis assassins after him. Neolandus barely survived, and fled to Old Korvosa.[4] 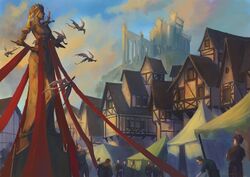 Since Ileosa left behind no heirs, she was succeeded by Cressida Kroft after her death. On the anniversary of Ileosa's defeat, the people of Korvosa celebrate the Crimson Festival, a week-long celebration of the liberation of the city from a tyrannical queen and a dark time. The heroes who defeated her are depicted in various souvenirs for sale in the numerous festival stalls, while wooden effigies of Ileosa are raised and burnt each night. Until then, passers-by are encouraged to hurl insults and rotten fruit at the effigy so the local house drakes can eat them and then defecate on the statue.[6][7]