The sahuagin[1] (pronounced sah-HOO-ah-gihn), sometimes called sea devils,[2] are one of the most populous aquatic races to dwell upon Golarion's ocean floors, much to the chagrin of the ocean's other races.[citation needed] 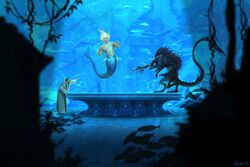 Sahuagin appear as some sort of cross between humanoids and fish, while their frame has much in common with humans—they are larger with most sahuagin being at least seven foot tall—having two arms and two legs they also boast a tail that ends in a fish-like fin to help propel them through the water. A sahuagin's head is clearly piscine, with a mouth that gapes like a fish but it is filled with sharp, flesh-rending teeth.[3]

Female sahuagin lay clutches of up to 200 eggs each in well-protected chambers. Depending on its size, a sahuagin settlement can have from one to a dozen egg chambers. After three months, the eggs hatch, and the hatchlings quickly turn on each other in a violent feeding frenzy. After a year, the parents return to claim their offspring that were clever, fast or strong enough to survive in the egg chambers, recognising them by scent. Unclaimed young, either because their parents have died or cannot recognise them, are raised communally.[4]

Sahuagin grow limbs after six months, reach a height of five feet at the age of one, and attain their adult size at six. Sahuagin grow large but not feeble as they age, and some rulers have been known to live for centuries, but most are killed before their thirtieth year.[4]

Sahuagin can comfortably live in all aquatic environments, regardless of pressure or temperature. Regardless, they markedly prefer warm coastal waters, where food and prey are both plentiful. Some of them have settled on the Plane of Water.[4]

Sahuagin are intelligent, orderly beings that barely suppress their bloodlust, and the smallest provocation can tip them off. In order to satiate their bloodlust, they periodically revel in bloody waters; those who cannot do so either become lethargic or murderous.[4]

Sahuagin society is a ruthless, orderly meritocracy. Titles are earned with prowess and skills and lost with incompetence; showing any sign of weakness is to risk death. Children of nobles have more opportunities and training, while those of commoners must fend for themselves as soon as they mature, and sahuagin take pride in powerful relatives, but otherwise bloodlines matter little. A commoner's ambitious child might become king or queen, while a royal's inept offspring can end up as food like any other.[4]

Each noble sahuagin aspires to subjugate others and become the ruler of an empire. The sahuagin are at constant war against each other, and their kings and queens encourage these petty feuds as a means to satiate bloodlust, control their numbers, and hone their skills.[4]

The sahuagin race's goal is nothing less than to dominate the seas, and they view other races, especially aquatic elves, locathahs, merfolk, and tritons, as nothing more than food, game, or slaves. Alghollthus and krakens are both hated and respected, being the greatest threats to the sahuagin themselves. The only creatures sahuagin seem to get along with are sharks, with which they can communicate telepathically, and the shark-like adaros.[4][3] Sahuagin have even developed their own species of servitor sharks called feeders in the depths, which are more intelligent and more bloodthirsty than regular sharks.[5] Other than sharks and adaros, sahuagin have been known to enslave sea monsters like dragon turtles as beasts of battle.[4]

Sahuagin can be found living in most of Golarion's temperate seas from the Obari Ocean and the Inner Sea to the nearly endless expanse of the Arcadian Ocean. They build vast cities in the depths of the ocean that rival the air breathers' great metropolises, while near the shoreline they create impregnable fortresses from which to launch raid after raid against land dwellers. It is not just those above the waves whom the sahuagin hate, they are in constant conflict with other aquatic creatures such as the merfolk, gutaki, and even the mighty alghollthus.[3] Their warlike tendencies have made the sahuagin one of Golarion's most hated races.[6]

While they are a threat to any creature they are near, the sahuagin are a particular threat in the western isles of the Shackles, especially around the port city of Ollo.[7] They are also one of the dominant races of the amphibious River Kingdom of Outsea, where they are strangely able to live in relative peace with the native population of merfolk.[8]

On the continent of Tian Xia, they are most commonly found in the undersea kingdom of Xidao, although they exist in smaller numbers than the dominant locathahs. They dwell in the many caverns and crevices which honeycomb the underwater trench known as the Aya-Maru, where they live in nearly constant conflict with local merrow tribes.[9]

On the continent of Casmaron, a group of sahuagin control the mangrove islands and shallow waterways of the Kuruban Swamp in the south of Vudra. They defend the swamp from the rampaging aberrations that ravage most of the rest of the Open Bridge region. The sahuagin are investigating some sort of ancient ruins within the depths of the swamp.[10]

In the Okaiyo Ocean, the Sintos Trench is home to greater numbers of sahuagin than anywhere else in Golarion, enough to form a true empire. Their capital, whose true name is unpronounceable by most other species and is often called Furydeep instead, is home to 10,000 sahuagin, in addition to large numbers of adaros, sharks, aquatic mutants, and slaves.[11]

Sahuagin are not just limited to Golarion's oceans. They can also be found on the Elemental Plane of Water. They are not native to the plane, but migrated there thousands of years ago at the behest of some now-forgotten prophet. They arrived soon after the death of the final Saline Padishah, Niloufar the Great, and the demise of the marid empire. The sahuagin spent hundreds of years carving out a vast empire for themselves before they fell to bloody infighting. Now rather than one vast, united empire, there are countless smaller "kingdoms" controlled by ruthless warlords, hulking mutant sahuagin, or strange religious cults each seeking to recreate their ancient empire with themselves at the head.[12]

Sahuagin have a unique genealogy which is prone to random useful mutations. Within their society these mutations are seen as a divine blessing, and those who possess them frequently rise to the highest level of sahuagin society, if they did not die in the hatcheries. By far the most common of these mutations is the additional set of arms of four-armed sahuagin, who account for one percent of surviving hatchlings. Another infamous mutation are the rare and mysterious sahuagin individuals known as malenti: these are sahuagin who look exactly like aquatic elves. Despite their less fearsome appearance, within the malenti beat the same bloodthirsty hearts as those of any other sahuagin.[3][13]

Numerous other strains of mutant sahuagin exist in addition to four-armed mutants and malenti: