"The Lady of Graves", Pharasma (pronounced fah-RAZ-mah)[1] is the goddess who shepherds Golarion's recently-departed souls to their final reward. Upon death, souls migrate via the River of Souls to Pharasma's Boneyard in the Outer Sphere, which sits atop an impossibly tall spire that pierces the Astral Plane.[2]

Pharasma makes no decision on whether a death is just or not; she views all with a cold and uncaring attitude, and decides on which of the Outer Planes a soul will spend eternity. Pharasma is also the goddess of birth and prophecy: from the moment a creature is born, she sees what its ultimate fate will be, but reserves final judgement until that soul finally stands before her. As the goddess of death and rebirth, she abhors the undead and considers them a perversion.[2][3]

According to the Concordance of Rivals, Pharasma is the oldest being in creation, the sole Survivor of the previous multiverse's destruction. She was responsible for shaping the new reality in its earliest days and shielding it from Those Who Remain, who have always lived outside the multiverse.[4] According to the Windsong Testaments, she appeared alone in this new reality and, through the use of the Seal, willed most of existence into being, including the Outer Sphere, numerous planes and the eight earliest gods. Along with Yog-Sothoth, she became one of the two anchors of creation, and between Pharasma and Yog-Sothoth, the Age of Creation began with the birth of the Great Beyond.[5]

Pharasma is counted among one of the original gods that opposed Rovagug. She magically imbued the Dead Vault with potent wards against escape, to serve as Rovagug's prison. Sometime after, Urgathoa's escape from the Boneyard and return to the Material Plane brought undead and disease to the world.[6][7]

Pharasma was a part, albeit minor, of the Thassilonian pantheon, acting as the goddess of death.[8] During the tumultous exodus of Azlanti refugees after Earthfall, Pharasmin priests oversaw funerals that conscrated the lands and prevented the dead from rising as undead.[9]

The death of Aroden, the first of the ascended gods, at the end of the Age of Enthronement, was extremely unexpected. His death was not prophesied, and once he died, most of the other prophecies in the world started to go awry as well. Many of Pharasma's priests have lost their faith or have gone mad as a result, but those who remain, are finding that Pharasma's hold over prophecy is becoming less important, while her domain over death, birth, and fate, are growing stronger. It is a time of change for Pharasma and her faith. Some legends say that Pharasma knew the death of Aroden was approaching, but chose not to tell her followers for reasons unknown.[10]

Pharasma judges souls at the Boneyard.

Pharasma remains neutral in almost all aspects towards other deities. Iomedae still bears a slight grudge against her for not revealing Aroden's impending death,[2] and fights broke out between the clergy of Pharasma and Aroden shortly after the latter's death for similar reasons.[11] Urgathoa and her followers are the closest she has to an enemy.[12] The god of accidental death, Zyphus has a fierce rivalry with the Lady of Graves, but it is not altogether clear if this feeling is mutual.[13] Pharasma also has a mysterious connection to the minor god of the end times, Groetus, for he hangs in the sky above her Boneyard as a gibbous moon.[14] Pharasma's clergy often worked with those of Aesocar, especially those who delivered Azlanti babies.[9]

The psychopomp usher Atropos is Pharasma's youngest daughter, and many psychopomps whisper that she is training Atropos to succeed her when the multiverse ends.[15] 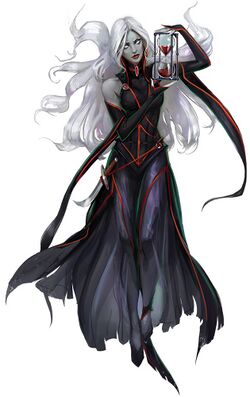 Pharasma is most often depicted as an ashen-skinned Garundi woman with white eyes. She wears a dark, hooded, robe-like dress and holds an hourglass filled with red sand.[2] She is alternatively depicted as a mad prophet, a reaper of the dead, or a midwife, depending on her current role.[16]

Pharasma's domain is the Boneyard, which sits atop a great spire rising out of the Outer Sphere and attracts all souls from the Material Plane who pass it. On top of the spire is a vast necropolis of courtyards, graves, monuments, and forums filled with the newly dead souls awaiting judgement. Each section is styled after a different outer plane and contains celestials or fiends that look over the souls and assist them to their final destination once Pharasma determines their fate. Pharasma herself resides in a Palace, where she judges the most difficult souls that arrive at the Boneyard.[17][18]

Pharasma's pleasure is often signified through the appearance of scarabs and whippoorwills, both of which can serve as psychopomps to guide a departing spirit to her side. Black roses are thought by her followers to bring good luck, most especially if the rose bears no thorns. The goddess can sometimes allow a departing spirit to give witness to her murder, send a short message to comfort the living, or haunt an enemy. Her displeasure is signified by bleeding from beneath the fingernails, an unexplained taste of rich soil, the discovery of a dead whippoorwill, the feeling that something important has been forgotten, or cold chills down the spine.[19][16]

Pharasma employs a number of immortal beings as servants. Among them are the psychopomps†, who are created from souls whose lives did not pull them toward good or evil, structure or chaos. They serve Pharasma in the Boneyard as advisors, judges, caretakers, explorers, guides, guards, and even soldiers when needed.[17] Her divine servitor race are the ahmuuth psychopomps, humanoid creatures that battle undead and help lost souls find their final reward.[20]

Birthed-in-Sorrow
This servant of Pharasma is a linnorm-like creature who possesses clerical powers, and uses them to fight the undead.[21]

Echo of Lost Divinity
This minion is a spectral warrior bedecked in expensive Azlanti dress. It bears an uncanny similarity to known renderings of Aroden, and only appeared in Pharasma's service at the beginning of the Age of Lost Omens.[21]

Endless Gravestone
This servant appears to be an animated, wheel-like being composed of rock.[22]

Steward of the Skein
Pharasma's herald is a mighty armored and winged warrior who travels the planes to restore the balance of life and death, announce auspicious births, and battle the undead hordes.[22] 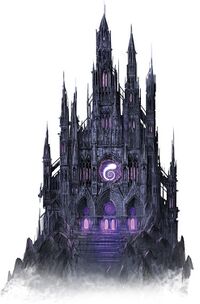 Many of Pharasma's worshipers are those closely aligned with either burgeoning life or terminating death. These include midwives, grave diggers, and morticians.[2] Pregnant women often carry small medallions bearing her likeness to protect their child. Her followers dress in black for her ceremonies (no matter the local custom), with their clothes adorned with silver, and carry tiny vials of holy water.[16][19] Her faith is most commonly practiced in Brevoy, Nex, Osirion, Qadira, the Shackles, Thuvia, Ustalav, and Varisia,[16][23] and among the Mwangi,[24] Shoanti,[25] and half-orcs throughout the Inner Sea region.[26] Pharasma is also the most popular deity among the strange, death-touched planar race known as the duskwalkers.[27]

During the Age of Legend, before the death of prophecy, Pharasma was worshipped by those Azlanti who relied on this power. The ancient Pharasmins hated undead as much as modern ones do, and their famous squads of undead slayers were quick to investigate spellcasters seeking lichdom and responded when dangerous undead were discovered within the empire. Azlanti citizens knew danger was near when they saw Pharasma's grim priests.[9]

Pharasma's faith has been spread to the Worldscape by champions abducted from Golarion, and has remained strong in the shadows for centuries. Pharasmins believe themselves already dead, and see the Worldscape as a final proving ground, where they could prove their courage or diminish their vices, before they proceed to the Boneyard and receive her judgement. Pharasma's religion was eventually banned in Shareen by Empress Camilla alongside all non-Issus faiths, its clerics exiled or burnt on pyres.[28]

Pharasma is also a popular deity on the distant continent of Tian Xia where she is known as the Mother of Souls. The name reflects her dual nature as both the giver and the taker of life. Her worship is most common in the Taldan colony of Amanadar, Dtang Ma, Goka, Shaguang, Shenmen, Shokuro, and Zi Ha.[29]

Her priests are typically clerics, diviners (although less so since the death of Aroden), and necromancers who choose not to create undead. Her followers view the undead with hatred and consider them a great abomination. Pharasmins view putting the undead to rest as a holy duty. The creation of undead is outlawed, and commanding undead rather than destroying them is deeply frowned upon as well.[2]

The temples of Pharasma have the appearance of dark and ancient cathedrals, usually found close to a graveyard, although a single stone in an empty field or graveyard can just as well serve as a shrine.[16] Underneath the buildings are catacombs filled with crypts of the dead, typically priests or affluent townsfolk. Being entombed in these catacombs is thought to bring favor from the Lady of Graves.[2] For example, in the Osirian city of Sothis, the Necropolis of the Faithful extends out from the original grounds of the High Temple of Pharasma.[30] In contrast to these you find the Serene Spiral, the high rising majestic temple of Pharasma in Lamasara.[31]

The services held by worshipers include chanting and singing. They are typically considered a joyous occasion, and a celebration of the circle of life and death. Members of the clergy also keep records of a community's deaths and births.[2]

Pharasma's holy book is called The Bones Land in a Spiral,[2] written by a prophet long ago. Its predictions are so vague that no one is sure if they are accurate or if they have already happened. Other sections that were added later contain information on safe childbirth, the proper burial of bodies, performing auguries, and other such matters.[16]

In Absalom Reckoning, the third month—"Pharast"—is named in honor of the Lady of Graves.[32] Pharasma's followers celebrate the Day of Bones on the 5th of Pharast,[33] and in nations where the Lady of Graves is a prominent deity, her priests take part in the Procession of Unforgotten Souls in the weeks leading up to the harvest feast.[34]

Gods are often associated with certain animals, either because they possess a quality favored by the god, or because the god's faithful feel a special kinship to them. Pharasma's favored animals include whippoorwills, scarabs, and elephants.[35]

The Voices of the Spire is a militant wing of the Pharasmin priesthood devoted to the extermination of undead.[36]

The Pharasmin Penitence is an extremist sect that views worldly pleasures as going against Pharasma's plans and actively seek out those whom they feel upset their beliefs by making life easier, for instance, arcane casters.[37]

The Casarmetzes are church midwives who are so skilled at the procedures of childbirth that they are able to keep both mother and child alive in dire circumstances.[37]

Paizo published a major article about Pharasma and her church in Trial of the Beast, p64ff.