Orcs are warlike humanoids most renowned for their hatred of civilisation, ceaseless raiding and violent attitude.[3][4]

Orcs resemble some sort of feral human but with much more bestial features, most prominently they have oversized, boar-like canines and sharp teeth. Orcs are normally around six feet in height; however, they often seem much larger due to their intimidating muscles. Orcs scar easily so even the youngest orc warrior will already bear an intimidating array of scars.[5] Orc skin tone varies between a sallow pink through various shades of grey to dark green. Orcs possess small, beady eyes that are very sensitive to sunlight; their facial features are vaguely pig-like; and their hair is wiry like a boar's bristles.[6] On average, an orc weighs around 210 pounds.[3]

An orc’s drive to overcome challenges and prove themself spurs many orcs to become adventurers, though orcs are more likely to set out on their own or with other orcs than alongside adventurers of other ancestries. They thrive in martial classes like barbarian and fighter.[7]

When first encountered in the depths of the Darklands, orcs were little more than ferocious animals. Their earliest fights against the dwarves taught orcs the rudiments of civilisation as they had finally encountered a foe that could not be overcome with just fists, teeth, and sheer fury. Eventually, they learned to wield stolen dwarven weapons and to modify stolen armour to fit their hulking frames. It was not enough. As orcs rose from their animalistic beginnings, still the dwarves forced them into retreat during their Quest for Sky.[5] Eventually, they were forced onto the surface of Golarion ahead of the crusading dwarves in places like Deepgate.[8] Upon reaching the surface in -5102 AR,[9] the orcs found a sunless land still engulfed in the Age of Darkness with the remains of shattered empires like Azlant and Thassilon scattered across the land.[5]

During the Age of Darkness, the orcs prospered; to them, this era was known as "The Sacking" as the orcs rampaged across the surface world all but unopposed.[5] As the perpetual darkness created by Earthfall slowly gave way to more and more daylight, the Age of Anguish began in -4294 AR and orcs knew the burning kiss of the Sun.[10] This marked the start of a centuries-long decline for the orcs that was only ceased by the birth and rise of the legendary orc warlord Belkzen. Determined to drive the dwarves back below the surface, Belkzen began a violent campaign that resulted in the sacking of Jerengoff in -3709 AR[9] and culminating in the conquest of the Sky Citadel of Koldukar in -3708 AR.[11] Belkzen's conquests give rise to the kingdom that still bears his name, the Hold of Belkzen.[5][12] 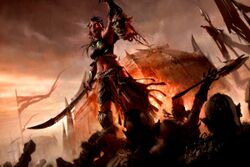 Orcs are generally 6 feet high or even taller, they look even larger due to their muscular physique. Orcs seems to experience emotions more intensely than other humanoids, however, they only seem to express rage, jealousy, lust, and other negative emotions, though this may be a result of their violent culture.[5] Orcs also have an incredibly high pain threshold, though this is not physiological, orcs experience pain as vividly as any other sentient race but possess a near unparalleled stoicism. Orcs fatalistically embrace pain allowing them to survive agony that would break or even kill another creature, some even claim that orc eyes have never adapted to the burning light of the sun, they have just learned to endure it.[13]

Orcs develop fast and are short lived, those that don't die violently very rarely even make it to 60. Orcs make up for their short lifespans and the high attrition of their violent societies by reproducing at an astonishing rate.[14] Orc mothers are kept from the battlefield and typically give birth to between two and five young at a time; they occasionally birth a single child who devoured their siblings in utero which is seen as an omen of greatness.[15] Their fecundity is so great that a tribe decimated in battle can almost totally replenish its numbers in as little as a decade.[14] Childhood is brutal with the weak being culled without hesitation; orcs reach physical maturity by the age of 12 but most male orcs begin their training as warriors as early as 8 years old.[15]

Further information: Tribes of the Hold of Belkzen 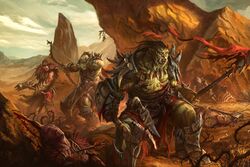 Orcs at war with the Shoanti people of Varisia.

Orcs' society is centred around strength and combat, every orc has a right only to take what they are strong enough to take and control only those too weak to resist them. Their society is a brutal hierarchy that is only able to function due to a few ingrained traditions. The first is family loyalty, as it helps all members of the clan to survive. Secondly, respect for hierarchy allows weaker members of society to survive since, while they will abuse those weaker than themselves, orcs rarely kill those below them unless they are directly challenged. These dominance challenges are an integral part of orc society, each orc faces constant danger from challengers below them and constant reminders of their comparative weakness from those above them. As the consequence for a lost battle is normally death, challengers carefully bide their time waiting for a moment of weakness. This hierarchical structure is so fundamental to orc culture that the very idea of equality seems like madness and orcs cannot imagine life in a society where they do not know whom they serve and whom they can abuse.[15]

Whilst, at best, only average riders, orcs value having fearsome mounts for the prestige they bring. The most common mounts include dire wolves, dire boars,[16] gortheks,[17] elephants, rhinoceroses and even owlbears, but orcs value rare or exotic creatures even more highly. Mammoths and other megafauna from the Realm of the Mammoth Lords are highly prized, particularly if it gives them the opportunity to fight and defeat the famed Kellid mammoth riders. In neighbouring Numeria, the orc tribes favour strange beasts brought from beyond the stars by the crashing spaceship that now forms the Silver Mount. Some cunning orcs have even learned how to ride the various robotic creatures that inhabit the land.[16]

Orcs are interested only in magic when it has immediate, tangible benefits making them unsuited for any kind of spellcasting that requires education or discipline. Instead, orcs favour magic that taps into primal sources of power like sorcerers, oracles, shamans, and witches, though they also have a surprising respect for both bards and skalds for their ability to manipulate emotions and whip orcs into a supernatural frenzy.[16] Magic users in orc society often either use their abilities to make themselves an integral part of the tribe, rising rapidly through it hierarchy, or in a self-imposed exile, seeing their strange powers as making them above other orcs.[18] Due to orcs respect for the sheer power of their deities, spellcasters will often try to associate themselves with them, with arcane casters often pretending that their power instead extends from the divine.[16] 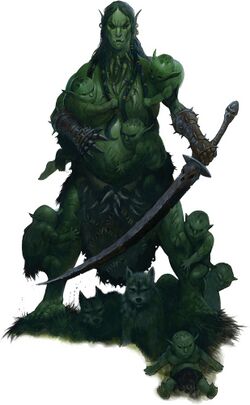 The Happy Fellow is a legend told by orc mothers to their young about an elf who comes to eat orc children who smile too much in their sleep.[19]

Orcs tend to view religion as simply an exchange of power with whichever god will help them most in battle and have no interest in any peaceful deities. Orcs worship a variety of deities, most common is the Rough Beast, Rovagug, as he is a god of near limitless power and infinite fury. Amongst the other greater gods, orcs most commonly worship Lamashtu and Gorum. Orcs are also prone to demon worship; the most common demon lords they follow include Baphomet, Orcus, Nurgal, and Zura. There are also small tribes of orcs that devoutly worship the less powerful nascent demon lords, such as Treerazer (who roams amongst the tribes that dwell within the Tanglebriar), Daclau-Sar, Murnath, Ovonovo, and even murderous Nightripper. Orcs also boast their own pantheon of racial demigods whom they worship somewhat interchangeably, often blending their various roles and myths to suit current needs. Some believe these are paragons of the orc race, raised to divinity by virtue of their sheer orcness, while others believe they have always been divine. They have worshipped these deities since before the Age of Darkness making them ancient beings either way.[20] Countless orc demigods exist; the eight commonly worshipped on Golarion are Dretha the Dark Mother, Lanishra the Slavelord, Nulgreth the Blood God, Rull the Thunderer, Sezelrian the Fire God, Varg the Iron Warrior, Verex the Despoiler, and Zagresh the Destroyer.[21][22]

The orcs of the Hold of Belkzen sometimes capture deadly rockwasps in globes of wax, in order to hurl them at their enemies.[23]