Considered nothing more than murderous pests by most, goblins dwell on the fringes of other societies, scavenging amongst their waste and building their society in squalor. Though weak on their own, goblins often gather in huge numbers to overwhelm their enemies.[1] 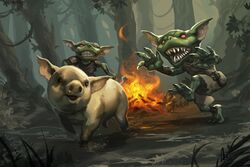 Goblins are not much larger than the pigs they like to chase.

A goblin is a short, emaciated-seeming goblinoid, about the size of a halfling. They tend to be around three feet tall with large, flat heads and long ears. Their skin tends to be leathery and grey, often wrinkled and covered in tiny scars, warts, and scabs. Goblins grow little, if any, hair, relying on their thick skin and huddling together in groups to keep warm. They have small, beady red eyes set close together over a little pug nose, above a hideously wide mouth lined with sharp little teeth. Goblins often dress in rags and scraps cast off by other humanoids and bear coarsely cobbled-together equipment.[2]

Many humans and similar races find it hard to distinguish goblin genders, though they do possess reproductive organs. Excessive weight is considered a sign of beauty among female goblins, with the ideal of goblin sexuality being an obese female barghest.[3]

Goblins mature rapidly, reaching adulthood in five years and living up to fifty (though most goblins are violently killed before the age of 20). Goblins' extremely high level of energy comes from both their accelerated metabolism and dangerous lifestyles. Their fast metabolisms make goblins eating machines stricken with almost constant hunger; fortunately, goblins can subsist on almost anything organic. They love salty foods, especially pickled food of all types.[4]

Goblins have an near-pathological fear and hatred of horses and dogs, most likely due to the mutual hatred displayed by these animals. Goblins are, in many ways, defined by their fears—not just of dogs and horses but also of humans, and even their religion is based on fear of their gods.[5]

Goblins love to collect treasure, but value appearance over utility. Thus, a shiny but worthless trinket is valued over a powerful but ugly magic item. The exception is goblin chieftains, who often possess the wits to make use of such items—if they can remember where they've been stashed.[5] Their love of shiny treasure means that goblins are also a common sight in the refuse pits and junkyards of non-goblin settlements throughout the Inner Sea region, where they scavenge for items they can craft into weapons and other interesting tools, a task they are unusually proficient in.[6]

To some degree, almost every goblin is an adventurer, surviving life on the edge using skill and wits. Goblins explore and hunt for treasures by nature, though some become true adventurers in their own rights, often after being separated from their group or tribe. Goblins often become alchemists and bards due to their love of fire and songs, and as scrappy survivors, goblins are often rogues who dart about the shadows, though their inherently charismatic nature also draws them to becoming a sorcerer.[7] 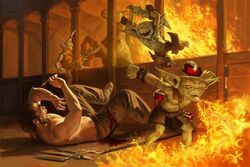 Though they usually remain beneath other races' notice, legions of goblins under the command of hobgoblin leaders wreaked havoc in Isger and neighboring realms in the Goblinblood Wars, a conflict that lasted four years starting in 4697 AR. Though the goblinoids were defeated, there were huge losses of life on both sides.[10] 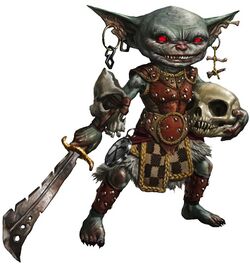 Goblins rarely build their own structures; they prefer to use terrain and natural defenses to their advantage, often settling in areas of heavy undergrowth, easily defensible caves, and ruins. They rely on scavenging for most of their sustenance and are gifted at surviving in even the most hostile climes. Goblins gather in tribes of up to a few dozen, led by a chieftain and sub-chiefs who are simply the toughest individuals in the group. They keep numerous mounts in their settlements, typically wolves, worgs, and goblin dogs,[5] but never ponies, horses, or dogs, as they have an intense fear and hatred of these animals.[6]

Religion holds an important place in most tribes, with complex (and, to outside ears, ridiculous) myths and legends, often fixating on odd-shaped natural features.[5]

Goblins conduct their worship in simple, bloody rituals filled with howls, animal sacrifice, and ecstatic dancing. They craft fetishes from the bones of their enemies, particularly dogs and humanoids.[11] The four Goblin Hero-Gods (Hadregash, Venkelvore, Zarongel, and Zogmugot) are common objects of worship among goblins, but they revere Lamashtu above all else, because she freed the hero-gods from Asmodeus. Goblin tribes that worship one hero-god to the exclusion of others are considered heretics.[12]

When not at war, goblins amuse themselves with sadistic games, inane but catchy songs, and arson. Goblins have an irrational fear of writing, however, believed by some to stem from the contracts used by Asmodeus to bind their barghest forebears in the mists of time. They believe that the mere act of writing words steals them from one's head.[5]

Goblins that differ from the majority include: 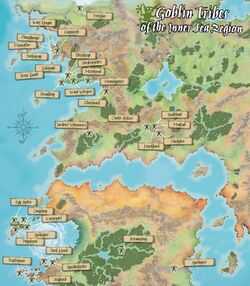 Map of goblin tribes in the Inner Sea region.

There are numerous pockets of concentrated goblin populations throughout the Inner Sea region, as seen on the map at right. This list is by no means complete, but provides some insight into these creatures and how they live amongst the rest of Golarion's inhabitants.

Goblins in Isger live in the Caverns of Chitterwood beneath the Chitterwood forest. During the Goblinblood Wars, a massive horde of goblins organised and led by hobgoblins poured out of the forest and overwhelmed Isger's army. They were eventually defeated by an unlikely alliance of Chelish Hellknights, Andoren Eagle Knights and the Druman Mercenary League. All sides were devastated, but the goblinoids were defeated; most of the survivors fled back to the caverns from whence they came. Numerous crafty and well-organized goblin tribes, most still led by hobgoblins, plot revenge from their caves, including the True Hoard, Spine Threshers, and People of the Stirge.[10]

In addition to the Chitterwood caverns, some Isgeri goblin tribes also inhabit the mine tunnels beneath the town of Dustpawn.[15] 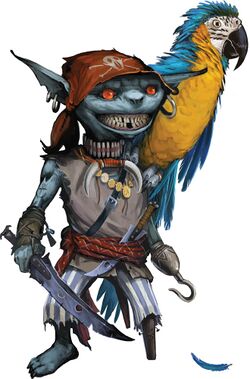 The native so-called monkey goblins of the Garundi archipelago known as Mediogalti Island, are fierce arboreal warriors who defend their settlement of Ganda-Uj against incursions by the native lizardfolk, kobolds, and humans from the nearby city of Ilizmagorti. Monkey goblins have a reputation for kidnapping trespassers to eat or sacrifice to their demon gods. They are divided into numerous smaller tribes organized not around kinship, but separated by their individual goals and methods. They include the territorial Egg Sucker tribe, net-hunting Knotsnarl tribe, flotsam-gathering Longlung tribe, berserker Pulpdrool tribe, and dinosaur-riding Spikespur tribe.[13][14]

Some goblin survivors of the Goblinblood Wars fled north to Nirmathas and Lastwall to eke out an existence far away from the trauma of that devastating war. One such group was the Crookedtoes tribe, whose more violent members had been mostly slain in that historic war, resulting in the leadership of the tribe falling to Chief Velkik, whose visions and dreams led her and the tribe to the worship of Sarenrae. In 4719 AR, after the region was overrun by undead, this tribe mostly evacuated the area and migrated south to Absalom.[16][17]

The Shackles, with its culture of piracy and anarchy, is a perfect environment for goblins. They avoid the larger islands where pirates hold sway, preferring more isolated locales, usually with a single tribe per island. Goblin tribes in the Shackles have a strong relationship with the sea; they scavenge from flotsam and shipwrecks, and a few tribes even build rafts, canoes, or crude ships of their own. They include the Bigbarb, Dark Hook, Reefrunner, and Squidwhistler tribes.[18] 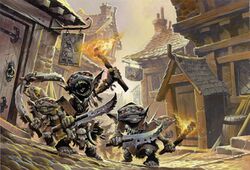 Goblins raid the town of Sandpoint.

Goblins have a strong presence in the wild land of Varisia, and a number of tribes call its western regions home, especially the Lost Coast. Recent expansion of human settlements have forced the native goblin tribes into fierce conflict with the newcomers, particularly around the town of Sandpoint.[19] Of the five local tribes, the strongest are the Thistletop goblins, who take their name from their off-shore base of operations in the ruins of Thistletop. Other major tribes in the area include the Birdcrunchers, Licktoads, Mosswoods, and the Seven Tooth tribe; dozens of minor tribes inhabit the area as well.[20]

In addition to the four goblin homelands noted above, minor goblin tribes are spread across the Inner Sea region. These include the snow-loving Frostfur tribe of Irrisen, the painted Ghostmask tribe of Nidal, the human-led Jurdan's Volunteers from Cheliax, the shrieking Screamwing tribe of the Mwangi Expanse, and the mutated Spelleater tribe of the Mana Wastes.[21] The barghest-ruled Kingdom of Zog in the River Kingdoms was one of the few stable goblin nations, but it fell to Yellowtongue Sickness and attack in 4217 AR.[22]

Paizo Inc. published a major sourcebook about goblins in their Pathfinder Player Companion line titled Goblins of Golarion, and a major section about them in Monster Codex.