Gold dragons are the pinnacle of metallic dragonkind and are almost worshiped by other good-aligned dragons. Other metallic dragons often seek out a gold dragon for advice or aid. 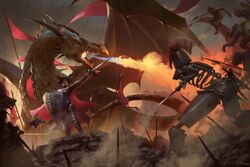 Unlike most dragons, gold dragons prefer warm open surface lands over caves, underground lairs, and other defensible structures, and especially favor open prairies. There are few creatures who can challenge them in battle, and their good nature and considerate actions give others few reasons to fight them. However, gold dragons also prefer to keep hidden caverns close to their sleeping areas, where they can establish sanctums and store their hoards, and will not settle in regions where suitable caves cannot be found.[1]

Gold dragons are generally able to detect the potential presence of useful caves and fissures even when these do not open onto the surface, and in these cases expose them themselves by digging down until they reach them. If a gold does not come across such a cavern after a few hundred feet, it will give up on that particular spot and try somewhere else. As a result, some plains are pockmarked with numerous exploratory pits excavated by questing golds, which afterwards become homes for other creatures.[1]

They carefully and sustainably hunt roaming herd animals by thinning their herds of their weakest members, graze on grass and leaves, and also enjoy well-seasoned foods—some going so far as to sponsor or purchase establishments that prepare food how they like it.[2]

While their lairs are often open, they still prefer to sleep on beds of coins.[2]

As ready and capable advisers, many creatures seek the aid of gold dragons, including angels, good-aligned divine beings, and other good-aligned dragons. Gold dragons often seek the aid of other creatures, such as allied humanoids or blink dogs, to guard their lairs, as such beings are capable of exercising judgement and restraint that traps cannot.[1]

In a less formal sense, they also enjoy the company of all metallic dragons, though none more than their own kind. Gold dragons living within a few days of one another meet frequently to discuss philosophy, socialize, and drink wine. More rarely, typically once or twice a year, a gold dragon might host a gathering of other metallic dragons — chiefly silver and bronze dragons, but occasionally brasses and coppers as well — to discuss the state of the world and what can be done to improve it.[2] Silver dragons are sometimes mentored by gold dragons to patiently keep them on the path of goodness. Gold dragons never take more than one silver pupil at a time, as taking on too many charges simultaneously has typically proven to be trouble for all involved.[3] A particularly prominent gold dragon might be responsible for calling a Convocation of Dragons once or twice a century.[4]

Outside of the relationships with other dragons, gold dragons often form partnerships with hesperid queens, with whom they have a close affinity, and sometimes cooperate to guard important artifacts. The hesperides typically consider such items to be part of their ward while the dragons see them as part of their hoards, but these opposing viewpoints never present an issue to the involved parties and these alliances can last for millennia.[5]

Gold dragons have the closest connection to Apsu of all metallics, and are the most likely to directly communicate with their creator. This often leads young golds to adopt superior and condescending attitudes towards other metallics. This habit is discouraged by their elders, as Apsu does not appreciate such arrogance among his children.[3]

Gold dragons who take on human form tend to blend into humanoid societies, with some even portraying several generations of a single "family". However, their neighbors often come to suspect that the undercover gold is more than they seem when otherwise single people continue to suddenly produce adult children. While most such golds are known to live in cities where order and goodness are dominant, they are also rumored to live undercover in cities where there is greater need of powerful entities working to promote good.[3]

A gold dragon's hoard typically consists of coins and precious metals, generally including large numbers of objects of limited artistic worth, such as gold or silver bars and rods, and broken statuary. They also collected large quantities of books, scrolls, tablets, and other written materials. Golds also collect artwork and magical items, but do not place as much worth on these objects as they do on precious metals and on their libraries. While golds do not universally favor any single type of art or crafted objects, most individuals have a specific type of work they especially prefer.[1] 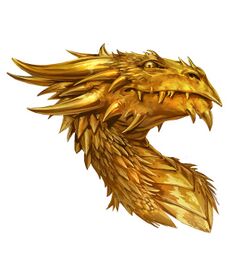 Gold dragons are renowned for their intelligence, wisdom, advice, and considerate decision-making. Some are known to spend days in isolation to think about decisions.[6]

Gold dragons can breathe fire and fly faster than most other dragons their age.[7]

The most famous gold dragon in Golarion is Mengkare, the founder and ruler of the island-nation of Hermea.[8]

Only one gold dragon, Kwislingyr, is known to have fallen fully into evil and corruption. He terrorized Taldor and its colonies for 150 years, defying the efforts of other golds to redeem him and of dragonslayers to hunt him down, before his months-dead body was accidentally discovered by a group of dwarves. By that point, Kwislingyr's scales had tarnished and faded to such a degree that his discoverers thought that they had come across a hitherto-unknown "yellow dragon".[8]