Kobolds are a small, craven, draconic race that dwells in places hidden from the sun, particularly subterranean caverns or densely wooded areas. Most commonly encountered in and around the nation of Andoran,[1] the inherent cowardice of the kobolds has lent the schemers a bit of cleverness and ingenuity, especially when it comes to devising deadly traps. Despite the fact that kobolds believe they are, in fact, the most superior race on Golarion, they are commonly found in service to other, more powerful masters.[2]

A kobold is a small, lizard-like humanoid with a short, stunted snout and a long, slithering tail. Their hands and feet end in sharp, clacking claws, and their scales appear in a variety of colors, of which red, black, white, green, and blue are the most common. Less common scale colors include yellow, orange, purple and gray; other shades, such as pink and gold, are also known to occur. "Ghost kobolds" with translucent scales are also rumored to exist, but no sightings have been recorded in centuries.[3][4][5]

Their scales are quite thick, giving them a modicum of protection from damage.[2] Despite their diminutive size (they generally stand about three feet in height and weigh about 40 pounds),[6] kobolds are quite agile and quick, able to easily keep up with the average human.[2] As with most other underground creatures, kobolds have darkvision, but are not well adapted to life on the surface, as they are quite sensitive to light.[2]

Kobolds often adventure in pursuit of the power, lore, and treasure that they feel befit their disproportionately large egos. When adventurers, militias, or careless tyrants shatter a kobold community, the survivors often latch onto new families, seeking emotional solace—and sometimes revenge. Kobolds excel as bards, rangers, rogues, and sorcerers, though they also often channel their ingenuity as alchemists or wizards.[7] 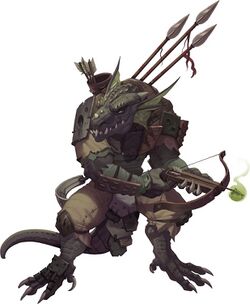 A kobold wields a crossbow.

Kobolds are omnivores and will eat almost anything their sharp teeth can chew and their strong digestive system can process. Like other reptilian creatures, kobolds have a slow metabolism, which means they require little food and drink to survive. This adds to their diligent work ethic, as they require few meal and water breaks, and increases their ability to survive in the nutrient-poor underground environment.[6]

Kobolds lay hard-shelled eggs that incubate for a period between 45 and 60 days, after which they hatch using their distinctive cranial horn buds. Although only six to eight inches in height at birth, neonatal kobolds are able to quickly take care of themselves, often spending the first hour after birth eating the remains of their shells. Cannibalizing other clutchmates is not unheard of and is seen by the adults as a sign of strength. Hatchlings grow quite quickly and double in size every year until achieving their juvenile state at around three. They are considered to be full adults around age 10. Sexual dimorphism is very limited, with non-kobolds rarely able to tell the differences between the sexes. Most kobolds are quite short-lived, with a typical life-expectancy of around 30 years before typically dying through violent means. However, when their lives are not cut off early, they have also been known to live for quite a long time, with the oldest kobolds claiming their age to be 140.[6][8]

Kobolds remain fertile throughout their entire adult lives, with females able to produce an egg once every 20–25 days. Given ideal conditions, however, females can lay a clutch of up to six eggs, and require a coupling only once every six years in order to produce viable eggs. Kobold females become more fecund as they age: a 40-year-old female may be able to lay 50 to 60 eggs per year, while an 80-year-old female may lay up to 100 per year.[6][8]

Occasionally, kobolds are born with stronger connections to chromatic dragons than others of their kind. These kobolds are distinguished by the ability to use the breath weapon of the dragon type whose scale color they have.[9]

Kobolds typically live in hierarchical tribes isolated from each other and from other intelligent beings. When they encounter other societies, kobolds often make a habit of stealing resources and livestock from their neighbors, earning them their reputation as thieves. Their possessiveness of their mineral resources also leads them to hostilities with other beings, as the kobolds view all minerals in their territory as theirs; when they discover others mining anywhere in their claimed lands, they view them as thieves and interlopers and respond violently. This holds true regardless of whether the other party settled the area before or after the kobolds did. When two kobold tribes come into conflict over resources, they typically engage in swift, violent clashes until one tribe's chieftain is slain, at which point the survivors are enslaved by the victorious tribe.[10]

Kobold settlements are usually complex systems of heavily trapped tunnels and warrens surrounding an inner core consisting of the tribe's living spaces, larders, workshops, and mines. The tribe's eggs are kept until hatching in a hidden location, which is kept secret from most members of the tribe to ensure that they cannot reveal it if captured and interrogated. Elder laying females are likewise hidden in the deeper parts of a warren and fiercely protected, as many tribes depend on their ability to lay numerous eggs in a short span of time to maintain their numbers.[8][10]

Although kobolds do not farm crops, they often keep domesticated animals for a variety of purposes. Dire weasels are kept as guard and hunting animals in a manner similar to how dogs are used by humans, while dire boars are used as war animals and mounts. When moving underground, kobolds instead use slurks and giant ants as mounts; giant ants are also used as pack animals, and as a source of poison for traps. Bats are trained to carry messages, which kobold tribes use to contact one another. On occasion, bulettes are trained to assist mining and tunneling operations. Kobold myth holds that they were the first culture to domesticate and raise animals, which they foolishly taught to humans.[8][11]

A second group of kobolds, the forest kobolds, exists separately from the more well-known subterranean kobold cultures, and instead inhabits deep forests. Forest kobolds are more barbaric than their kin, are rarely literate, and live predatory lives focused on hunting and eating any non-reptilian entity they encounter. Forest kobolds are typically green.[9][12] Forest kobold tribes are known to ally with quickwoods to defend their lairs.[11]

Ancestral enemies of the kobolds are the dwarves, the gnomes, the cave giants, the rock trolls, the goblins and the purple worms.[10][13] 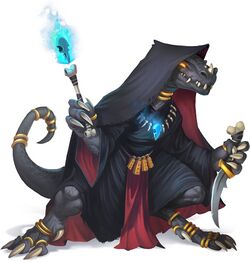 Kobolds typically worship dragons' gods such as Apsu and Dahak. Many kobolds worship Asmodeus due to the emphasis placed by his faith on tyranny and subjugation, and seek to model their own tribes' societies after the rigid hierarchy of Hell. These infernal priests are often considerably influential, either advising chieftains or leading their tribes in their own right. Some kobolds are also known to worship Lamashtu, as well as powerful fiends such as the archdevil Mammon and the demon lord Andirifkhu. On occasion, kobolds affected by blightburn radiation are known to turn to the worship of the archdaemon Trelmarixian. Kobold spellcasters are also known to worship Nethys, typically placing less emphasis on the All-Seeing Eye's dual nature than on the ability to use magic to impose one's will on the external world.[10][14][15]

Kobolds also worship the dragons themselves, which they view as effectively all-powerful entities and as ancestral deities, as living gods. This occurs both through the worship of individual dragons living in or near a tribe's territory and through worship of non-specific, symbolic conceptions of dragonkind. Kobolds' dragon worship often frames dragons as living embodiments of the might and power of Dahak, despite the dragons' own hatred of the deity.[10][16]

The origins of the kobold race are told in countless ways by the many tribes scattered across Golarion. Most break down to one of these three stories.

This story claims that kobolds were made by the draconic god Apsu from the dying spirits of the chromatic and metallic dragons that his son Dahak had brought down. Their life essence had faded to only a little flame, and Apsu feared that it was not strong enough to save them from death if he brought them back in their true form. Instead, he reincarnated their spirits into smaller, kobold bodies.[17]

This myth tells that kobolds were born from Dahak's tears of shame after he defeated his father Apsu in battle. These tears had many colors and as they hit the earth, each transformed into a differently colored kobold.[17] 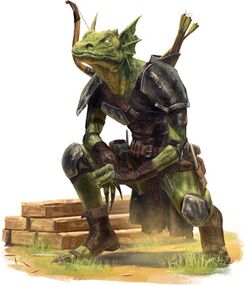 The Sewer Dragon tribe are a tribe of sophisticated kobolds, allied with the blue dragon Lirovelix, who have dwelt beneath the city of Absalom since 4696 AR. The kobolds attempted to force tributes from outsiders and expand their sewer "empire". This aggression has since been resolved with a formal alliance with the Pathfinder Society.[13][18]

The Hookclaw clan also live under the city and have done so for countless generations. Although well established, the Hookclaws are not as successful or powerful as the Sewer Dragons.[19]

The Candlestone Caverns are home to the powerful Black Claw tribe, as well as several smaller tribes that owe fealty to the Black Claws. The Black Claw kobolds are noted for a strong cultural association with poison, which they employ both in their traps and in a dangerous coming-of-age ritual where each kobold is required to soak her hands in a bowl of spider venom, permanently staining the black.[20]

There are kobold tribes in the Darkmoon Vale of Andoran, who favour the use of the flying talon in combat.[21]

Tribes of kobolds dwell in the sewers of the Chelish city of Vyre, where they menace any who travel its treacherous depths.[22]

The Thunderscale tribe is the largest of the kobold tribes that live in the jungles of Mediogalti Island. They make their home in the vast cave network known as the Thunderscale Warrens and are known for their habit of painting their scales with bright plant dyes. Rather than worshipping dragons as other kobold societies do, they revere dinosaurs.[13][23]

Realm of the Mammoth Lords

The Icerender tribe is a kobold tribe that live in a pass in the Tusk Mountains. The kobolds work tirelessly to keep the pass open. A lot of caravans use that mountain pass in order to avoid the attacks of Lydek the White in the south. The kobolds sporadically attack and loot the caravans, and then they dispose of the remnants of them. A large part of the loot the kobolds obtain, is given to Lydek the White as a tribute.[13]

Just on the border between the Stolen Lands and Brevoy lives the Sootscale tribe. These kobolds dwell in the Silver Caverns, an abandoned silver mine in the foothills of the Icerime Peaks, and are engaged in a petty war with the mites that also inhabit the area. They are notable for their practice of changing their tribe's name to reflect that of their leader.[13][24]

Raptor Island is home to the Dankblade Crew, a tribe of kobold wreckers who lure passing ships onto the rocks of their island, sacking them once their run aground and selling their crews to the slaver ship Kraken's Tooth. The finest treasures obtained in these raids, however, are given to the dragon Machazmroh in an attempt to win its favor and patronage.[20]

The Embermaw clan lives beneath the Mindspin Mountains, above the Flume Warrens. Their alliance with the dragon Tsazgatherax has protected them from the nearby fire giants, who have resorted to pushing the salamander and azer clans of the Warrens into attacking the kobolds instead.[20]

Paizo Inc. published a sourcebook about kobolds entitled Kobolds of Golarion, a major section in Monster Codex, and an article about kobolds in Inner Sea Races (pages 142–147).