Brine dragons are native to the Elemental Plane of Water. They are one example of the extraplanar true dragons known as primal dragons.

As with all true dragons, brine dragons gain in power as they age. They have formidable physical abilities, and as they age they gain spell-like abilities and sorcerous spellcasting. Older brine dragons are adept at capsizing boats.

The salty bite of elder brine dragons' teeth can desiccate victims, weakening them over and above the normal bite damage. The bite of the very oldest brine dragons is so potent that any who survive the damage may still be temporarily stunned by the pain.

Brine dragons' breath weapon is a line of acid.[1] 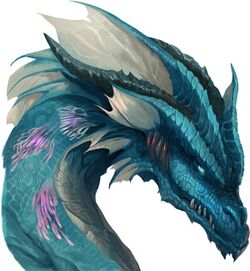 Covered in spines and frills, they are believed to have originated as elemental creatures in the area between the Planes of Water and Earth, although some speculate that they could also be transplants from another plane.

Brine dragons inhabit the darker, more saline depths of their home plane, far from the light of the Plane of Air.[2] Each brine dragon rules its own realm in the depths, which increase in extent the deeper one goes, as do the size and power of the individual rulers. These realms are united into the greater empire of Kelizandrika, ruled by several overlapping councils. The most senior of these councils advises the empire's ultimate ruler, the elemental lord Kelizandri.[3]

Brine dragons are solitary creatures, but as they age they become more and more concerned with ruling over "lesser beings".[4] They are often served by numerous humanoids and monstrous humanoids such as merfolk, murajaus, sulis, undines, and marids, whom the dragons force into their service through ironclad contracts. The marids, however, are often clever enough to subvert their would-be masters' authority.[3]

Some dragons have chosen to forsake Kelizandrika, due to both its internal power conflicts and the constant warfare against the krakens. These deserters are often hunted down by Kelizandri, who despises such betrayals, forcing the survivors to live as nomads or in exile. These dragons often live in floating cities pushed by the currents, while the largest of their kind carry their hoards and kingdoms on their own backs.[3]

The most powerful of their kind is Kelizandri himself, said to be the child of a brine dragon and a minor divine power. He rules his realm of Kelizandrika and is in frequent conflict with the neighboring sahuagin kingdoms.[5]

A brine dragon named Rezlarabren lives on Thoska Isle, on the southern end of the Ironbound Archipelago. She is allied with a tribe of skum whom she employs, in exchange for protection, to mine salt that she trades with the elves of the Mordant Spire. She is an enemy of the Ulfen of the Lands of the Linnorm Kings, due to having been hunted by them in her youth.[6]

A great wyrm brine dragon named Hyntheragha lairs in the exact center of the Obari Ocean, where she rules over and is worshipped by a tribe of merfolk whom, legend claims, she rescued after their settlement was destroyed by a storm.[7]