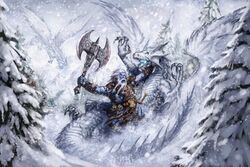 White dragons tend to be the most feral and animalistic of the chromatic dragons, relying on sheer force rather than elaborate plans or strategies. They live in cold mountain regions and arctic lowlands, making homes within freezing ice caves or other remote areas. Masters of the cold, white dragons employ freezing breath and a number of cold-based spells in order to freeze prey and foe alike. They prefer their food frozen solid.[1]

White dragons are primarily distinguished by their snow-white scales, which are thick and patterned with tiny ridges. Their heads bear a number of horns radiating backwards from their crowns, which are connected by a tough membrane. Clusters of small horns grow over their faces and lower jaws, and a similar texture extends over their bodies, breaking up their silhouettes. White dragons are lithe and muscular.[2]

White dragons prefer to live in intensely cold climates, where they are able to endure the cold thanks to the minute ridges on their scales trapping enough heat to keep the dragons warm. Most white dragons inhabit arctic environments such as tundra, but some inhabit high mountains in temperate latitudes. Some whites have settled as far south as Garund, but this is a rare occurrence. White dragons often claim territories covering thousands of square miles.[3]

Most white dragon lairs are dug directly into glaciers or are stony caverns coated in ice, and often open into deep shafts only accessible by flight. Whites often take over lairs originally made by other creatures, either working out clear boundaries with them if they are intelligent or penning them in out-of-the-way parts of the lair if they are not. White dragons create numerous traps and pitfalls within their lairs, using the slipperiness of the ice to send intruders into deep pits filled with gelid salted water or inhabited by dangerous creatures penned there by the dragon.[3]

White dragons are opportunistic predators, and use their natural camouflage in their snowy homelands to ambush prey. While highly effective predators in their environment, the scarcity of food in the arctic leads to white dragons having few compunctions about potential foods, and whites will readily consume plant matter and rotting meat.[3]

White dragons are almost always the dominant predators of their environments. While the weakest true dragons, whites are nonetheless exceeded only by other dragons in power and ferocity, and can thus establish themselves as unchallenged apex predators as long as stronger draconic competition is absent. It is rare for other dragons to directly intrude in a white dragon's territory, however, as most other dragons dislike the cold climates the whites favor.[3] Silver dragons are an exception, as their own preference for cold mountains leads them to compete with whites for lairs and territory. When a white dragon becomes aware of a silver's arrival, it will typically gather its hoard and flee, leaving the stronger dragon to claim its territory.[4]

White dragons tend to overhunt their territories, and often deplete their stocks of game to below the numbers necessary to sustain the dragon. When this happens, whites typically enter extended hibernation periods as they wait for their prey to breed back into numbers.[3] 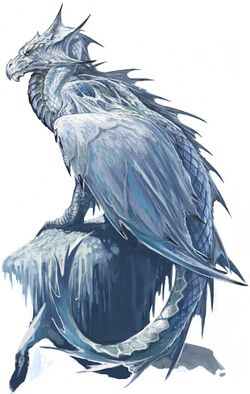 White dragons rarely take part in draconic society and have little contact with other dragons, but are often very social with one another. White dragons sometimes band together to hunt stronger prey or large herds of game; this behavior is especially common among younger dragons. While these bands may endure for periods of several years, during scarce times they are prone to disbanding or to turning upon and cannibalizing their weakest members.[3]

White dragons mating rituals involve extensive play-fighting, but do not leave their participants injured. Females mate with several males, and members of the same clutch often have different fathers.[3]

While mature white dragons can match and exceed any human in intelligence, the bestial lifestyles they lead during their youths often prove too ingrained for them to deviate from even late in life, leading most whites to remain as unthoughtful savages throughout their lives.[3]

Unlike other dragons, whites do not favor any specific kind of treasure and collect anything they believe that other creatures might find valuable. White dragons place great value on the rare magic items they collect, and go to great lengths to protect them.[3]

Lazakh are those white dragons who desire more to life than the animalistic lifestyles of their kind, and often try to pursue academic or philosophical goals. These white dragons are highly unpopular among their kind, who coined the term lazakh, meaning "big heads", as an insult that was later adopted by other dragons as a term of endearment. Most lazakh are killed by other white dragons, while the ones who survive tend to leave their homelands and become apprenticed to brass, bronze, blue, or green dragons.[3]

Bronze and green dragons tend to take on lazakh as academic assistants, who are then tasked with performing rote labor and chores for their teachers. Taking on these apprentices rarely results in their teachers' work being done more quickly or efficiently than normal, but enough reports exist of whites who provided sudden insights and leaps in logic that bronzes and greens continue to take lazakh apprentices in hopes of finding the next such idiot savant. Brass dragons tend to encourage their lazakh charges to develop their social and creative sides, while blue dragons incorporate their lazakh within their social networks as spies, contacts, and enforcers.[3]

The majority of Golarion's white dragons, by some estimates counting over three-quarters of their total numbers, live in the Crown of the World or in those parts of Avistan, Casmaron, and Tian Xia within a hundred miles or so of the Crown. In temperate latitudes, populations of white dragons exist in high, snow-capped mountain ranges such as the Kodar, Menador, and Mindspin Mountains. Two whites are also recorded to have lived on Droskar's Crag and fiercely competed for territory there before the arrival of Daralathyxl.[5]

On the planet Triaxus, where dragons rule vast territories in the continent of the Drakelands, white dragons tend to ascend in political power during the planet's decades-long winters. One of the most powerful white dragon warlords is Yrax of Ivoryglass.[16]

A population of white dragons exists in the Plane of Air, where they war against the silver dragons that also live there for control of floating icebergs. While the exact reasons for this conflict are not known, it is believed to be due to the whites seeking to control a set of objects known as the Shastiled, which are hidden within the icebergs and could provide the whites with a degree of control over other dragons, while the silvers seek to keep this from occurring.[5]