Kintargo, also known as the Silver City, is the capital of Ravounel and is situated on Nisroch Bay at the mouth of the Yolubilis River.[6] It is the main harbor for ships heading north to Varisia and west to Anchor's End. 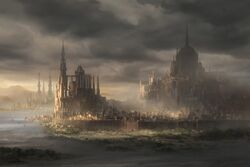 The skyline of Kintargo, showing Castle Kintargo in the left foreground on Argo Isle, and the spires of Alabaster Academy in the distance across the mouth of the Yolubilis River. The domed Temple of Asmodeus may be seen in the right foreground.

Kintargo sprawls from the Yolubilis River's northeastern shore onto part of Argo Isle in the river's mouth.[3] Its summers are warm and humid, followed by long, cold, and rainy winters.[7]

The city is divided into north and south ends by the Yolubilis River, with the two halves connected by Bleakbridge. It is further divided into eight districts:

Kintargo is a cultural capital famed for its art and entertainment, particularly the Kintargo Opera House.[citation needed]

While the official Church of Asmodeus is Kintargo's most prominent, Temple Hill also hosts temples for a few other state-approved faiths, including Zon-Kuthon, Abadar, and Shelyn.[9] Until the seditious acts of the Glorious Reclamation, even worship of Iomedae remained legal, if rare.[13]

Since enacting martial law, however, Lord-Mayor Thrune mandated the registration of all worshipers of Shelyn and monitoring of all Shelynite religious services.[13] Worship of deities aligned with freedom or rebellion—including Calistria, Cayden Cailean, Desna, Milani, and Sarenrae—are strictly outlawed.[5] The Silver Star shop and popular Sarenite shrine, owned by local opera star Shensen, was burned to the ground during the Night of Ashes, when agents of Barzillai Thrune also attacked local cults devoted to Milani and Irori.[13][10]

Much of Kintargo's past is unknown, in part due to suspected tampering with historical documents and records by agents of House Thrune.[7] Scraps of information remain, such as the city's unknown connection to the local dragons Adrakash, Ithanothaur, and Rivozair; stories of the Temple Hill Slasher; and the strange patterns of the Church of Asmodeus's Devil's Bells.[14]

Under Cheliax, Kintargo was part of the Archduchy of Ravounel.[15][16] Unprotected by any natural barriers, the city and its citizens were among the most cosmopolitan in Cheliax, and the infernal influence so prominent in other Chelish cities was not nearly as noticeable in Kintargo.[16][17] This also made the city a convenient home for those looking to overthrow the Chelish government,[18] and after instigators of the Glorious Reclamation fostered open rebellion in southeast Cheliax in 4715 AR, House Thrune installed inquisitor Paracount Barzillai Thrune as the city's new lord-mayor and established martial law.[19]

Presence of the Chelish Navy

As a major port, the city was frequently visited by ships of the Chelish Navy, which tend to exert a pall over life in the city. Seeking to give the naval commanders and crew a good show, former Lord-Mayor Jilia Bainilus tended to enforce the dictates of church and state before relaxing all that nonsense again after they departed.[16] 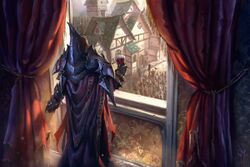 House Thrune placed Kintargo under a state of martial law, forcing former Lord-Mayor Bainilus out of power around the beginning of Arodus in 4715 AR. Bainilus has since gone missing.[7]

Under Cheliax, the eight noble families of the Court of Coin, once treated as trusted advisers, were largely ignored by Lord-Mayor Thrune.[3]

Of the eight families, three were openly loyal to House Thrune: Delronge, Sarini, and Tanessen.[22] 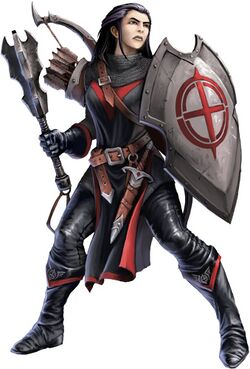 Under Cheliax, the Hellknights were once prominent within the city.

Order of the Rack

With the installation of martial law, the city hired a group of Hellknights from the insurrection-quashing Order of the Rack led by Paralictor Kyrre Ekodyre.[3]

Order of the Torrent

The city was also the only home of the otherwise nomadic manhunters of the Hellknight Order of the Torrent.[23] Its leader, Lictor Octavio Sabinus, reportedly went missing.[3]

A map and details about Kintargo appear in pages 17–19 of the Hell's Rebels Player's Guide, and a major article and map appears in In Hell's Bright Shadow on pages 58-73. Paizo has also published two poster maps, including a bird's-eye view depiction of the city, in the Hell's Rebels Poster Map Folio.