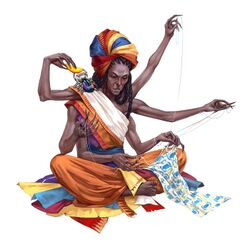 Grandmother Spider is known as a mythical figure in the Mwangi Expanse where she is thought to be a hoarder, and a tale about her is associated with bags of holding. The legend tells of a young man given a bag by Grandmother Spider in exchange for him using it to collect every animal in the jungle and bringing them to her web. He instead left with the bag, which the legend claims is the reason why spiders of the Expanse are so hostile to humans.[1]

Old Woman Makes the Stars
Written by the anadi cleric Raindrops-Sing-Her-Name Secha between the 2nd and 4th centuries AR, this epic poem features the opening line shared among all of the many stories of Grandmother Spider: "This I have heard, and heard once more, and so I think it true."[2]

Paizo published a major article about Grandmother Spider in Faiths of Golarion.