Brigh (pronounced BRY)[1] is the goddess of invention and seems to particularly favor creations that take on a life of their own, like clockworks or constructs. Unfortunately, the sort of creative minds who engage in the sort of invention that Brigh most favors, are those who are not prone to worship or evangelization—they tend to devote themselves to invention instead. As a result, her following is not very large.

No one seems to know whether Brigh was once a mortal granted divinity or whether she was a construct granted not only life but a potent spark of true divinity.[2][3]

Brigh is normally depicted as either a humanoid woman made entirely of intricate bronze clockwork topped with a metal skullcap, or as a perfectly symmetrical woman clad in transforming clockwork armor. Her holy symbol is a feminine mask with a single rune engraved on the forehead.[2][3] Gnomes depict her as one of their own rather than as a human, featuring long eyebrows and metallic wire hair.[4] When in her clockwork form, Brigh is said to draw perfect mechanical objects that she either releases into the world as independent constructs or gifts to others.[3]

Her herald is Latten Mechanism, and she frequently summons as servitors Karapek, a sentient bronze alchemist construct,[5][6] and Salometa, an inventor able to emit energy that separates alloys and metals into their component materials.[5]

A depiction of Brigh.

Her followers believe that all knowledge is meant to be built upon. To a devotee of Brigh, inventions are their legacy, attention to detail is paramount, and being willing to innovate around problems is critical.[7][3] Brigh's teachings ground this process in three equally important concepts, often conceived as a triangle: questioning, proposals, and testing. Each are considered necessary and dependent upon one another in the safe, concrete, documentable pursuit of knowledge.[8]

Brigh welcomes all research and invention as devotion, including the creation of destructive contraptions, but opposes acts of destruction that impede learning and development.[7][3] She allows her faithful to abandon research they deem immoral or hazardous, as long as they share the consequences that inspired their decision.[3] Indeed, Brigh mandates that her followers share knowledge, and refusing to do so—even if only posthumously—is seen as stealing from future researchers.[6]

Physical and social needs are acknowledged as necessary, but are valued less than alchemical or technological creation.[7][3] While Brigh de-emphasizes mortal concerns over advancing knowledge and innovation, she does see the value in passing knowledge and talent to offspring (as well as employing them in laboratories).[3] Most, however, are so devoted to Brigh that people outside of her faith call them "married to the Whisper," and such followers view their inventions and research as a legacy equivalent to passing on their family name.[8]

Brigh expresses her pleasure through spontaneous repairs, bronze sheens on mirrors, whispered encouragement from constructs, stimuli associated with workshops (such as the scents of grease or gunpowder), and flashes of insight. When upset, constructs malfunction, reagents explode, and tools fail or break.[7]

To gain specific boons of Brigh's favor, her faithful work on new creations—such as complex mechanical and magical items, toys, and gear—or disassemble and analyze such objects, all while reciting passages from Logic of Design. The worshiper then shares what they learned from the process, either by telling someone or taking meticulous notes for later publication or distribution. Such boons often manifest in Brigh granting the worshiper aspects of a construct, powers to command constructs, enhanced crafting abilities, the ability to treat constructs as living creatures, or limited control over time.[9]

Which many of her worshipers are human, she counts many gnomes, half-elves, and half-orcs as followers, as well as intelligent constructs. Her clergy largely consists of clerics who devote their lives to laboratory or workshop experimentation; those who go into the field seek lost techniques or technologies that could lead to new innovations, then write and publish their research to share with others. Others worship by building and selling contraptions as priest-peddlers, roaming civilization selling functional inventions.[4][9][8]

Devotees of Brigh keep strange hours as they are prone to lose track of time during their work, and many use stimulants to extend their work days. When working in groups, they discuss their work enthusiastically; with others, they are often considered detached from their communities (except in technological population centers like Alkenstar or Numeria).[10][9]

Her clergy has no formal dress, preferring pragmatic shop wear with a few decorations indicating their worship of Brigh and field of expertise.[10] This often consists of a leather coat with bronze buttons or clasps, googles, and tight leather cap.[8] Many of her worshipers wear a single toothed gear as a piece of jewelry, and it is not uncommon for some of her followers to carry sets of miniature tools as ritual objects[11] and a decorative mask of Brigh, either as a button or brooch or as a protective helm. Many also wear badges representing their field of interest or promoting their inventions.[8]

Brigh also inspires some inquisitors who pursue uncontrollable constructs or abusive or careless inventors. Her inquisitors are particularly protective of abused intelligent constructs, as well as of people threatened by rampaging constructs. Their primary concerns are the preservation and repair of such constructs and punishing any who abuse them.[3][4]

Lay worshipers include crafters such as blacksmiths, jewelers, toymakers, research-focused alchemists, and inventors.[4][3]

Brigh's low profile means there are no holidays devoted to her. Her worshipers mark anniversaries of great inventions and discoveries, especially local ones, and honor related national holidays and other gods' holy festivals, such as Abadar's Taxfest out of respect for the mathematics involved, Andoran's Wrights of Augustana for the feats of ship building, and the craft of fireworks in Sarenrae's Sunwrought Festival.[12][8]

Brigh's holy text is Logic of Design, an essay on invention, experimentation, documentation, and discovery that also functions as a textbook on the scientific fields of metallurgy, electricity, physics, and stonemasonry. It is more informational than dogmatic, and reinforces the tenets of scientific methodology and shared knowledge that underpin her worship.[10] 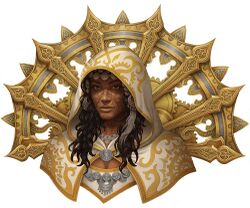 Brigh has few centers of worship, and outside of Alkenstar and Numeria, her followers typically maintain a detached presence where they research and worship. Temples to Brigh are designed like workshops with tools for crafting, storage for inventions, and a shop that sells goods built at the temple. Temple leaders are usually called the High Clockfather or High Clockmother.[4][9] Notable temples and shrines to Brigh include:

Organized services of worship consist of music of bells and music boxes, as well as recitation of scientific formulae, offerings of materials and tools, and demonstrations.[9]

Relationships with other deities

Brigh is on good terms with Abadar, who appreciates the improvements to process and record-keeping that her inventions provide; Torag, for his creative work; Cayden Cailean, as she appreciates the science of brewing; and Shelyn, with whom she is closest despite sharing little in common aside from an appreciation for artistic creation. She works well with any non-evil deity who shares the Artifice domain, including Bharnarol and Eldas.[10][6]

Norgorber's closed approach to research has put her off further alchemical collaboration with him, and his followers repeatedly assault hers to disrupt alchemical and healing research.[6] She dislikes Rovagug's utter absence of creation in favor of total destruction. Her lack of focus on family means Torag doesn't reciprocate her respect.[10][6] Gorum disregards inventors, even of weapons. Followers of Asmodeus and Zon-Kuthon view Brigh's drive to freely exchange ideas and knowledge as a threat to their rule over Cheliax and Nidal.[6]