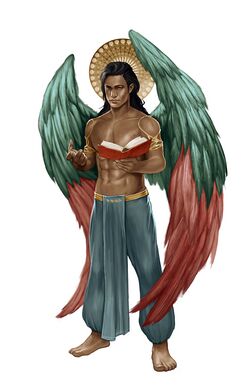 A depiction of Gruhastha holding a book.

Gruhastha is a male Vudran god.[1] He was a mortal nephew of Irori who, according to legend, ascended to divinity by authoring a book so perfectly profound that he merged with it and became a god—the Azvadeva Pujila.[2]

Gruhastha is called the Keeper as he keeps watch over Golarion until enough beings reach enlightenment, at which point the world would itself become part of Nirvana.[1]

Gruhastha is the nephew of Irori and an ally of the Master of Masters in the role of his advisor.[1][2]

Gruhasthans consider all books to be holy, but none surpasses the Azvadeva Pujila, which is both an incarnation of Gruhastha himself and his greatest work of text. The work is relatively informal for a holy book and full of fables, each with layers of hidden wisdom.[3]