This page contains spoilers for the following products: Lords of Rust.

Hellion is an artificial intelligence revered as a god for providing divine powers to its followers, the Lords of Rust.[1]

Centuries ago, the Iron God Unity downloaded some of its code into an empty processor, mounted it into an arachnid robot, and tested it by sending it out from the Silver Mount. Once outside, this new artificial intelligence gained sentience and fled to central Numeria.[1] The spider-like robot set up a hidden lair in Scrapwall in 4275 AR.[2]

In the years since, the new artificial intelligence developed the unstable, irrational persona of Hellion and drew worshipers in Scrapwall seeking its power.[1] 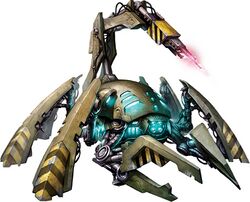 An arachnid robot chassis similar to the one used by Hellion.

Hellion most frequently appears in video monitors and holograms in a fiendish form but has little knowledge about, much less affiliation with, the lower planes. It also inhabits a specially modified arachnid robot when necessary.[1]

Hellion rules its congregation largely through fear, intimidation, and the lure of divine power. The Lords of Rust serve as its clergy, and it uses them to recruit or subjugate new followers.[1]

Hellion counts a number of faithful servants among his cowed followers, including: